Head Over Hills is a 5* luxury retreat situated along the Garden Route of South Africa.

Despite spending 8 weeks working at a state hospital in Cape Town, it would be a lie to say that the last few months have been in any way stressful. Joe and I are absolutely in love with South Africa and have enjoyed treating ourselves to all of the delights that this incredibly beautiful country has to offer. These treats are largely focused around the themes of eating and drinking, relaxing and having a great time. So with these aims in mind, we decided to spend our final two weeks in South Africa travelling along the Garden Route with various stops along the way. The Garden Route is essentially the N2 highway which starts in Cape Town, in the Western Cape, and meanders 800km along the coast to Port Elizabeth in the Eastern Cape. However, this is no motorway as we know it. Along its course the road travels past some of the most beautiful beaches in the world, is flanked by rolling hills and awesome mountains, lagoons and lakes, forests and rivers. You’ll also drive past fields of Ostrich and potentially over an aggressive Baboon or thirty.

One of the more popular destinations along the route is the forested town of Knysna, situated on a picturesque lagoon and famed for its Knysna Heads, two giant headlands that ships would need to negotiate before entering the lagoon from sea. The variety of accommodation in Knysna reflects its popularity with tourists and something can be found for most budgets and tastes. Unquestionably, the areas best views of the Knysna Heads can be seen from Head Over Hills Luxury Retreat, and we were lucky enough to stay there for our two nights in Knysna. Situated on the Eastern head, the retreat offers breath-taking views of the Western head and Indian Ocean from all of it’s eight rooms. 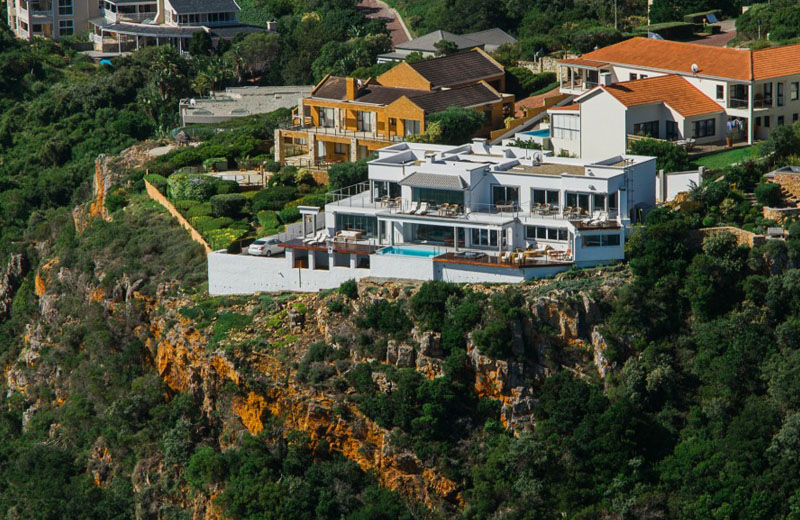 Manoeuvring along the tiny winding roads up the Eastern head after a fairly long drive from Hermanus, we had google imaged to death the view from our balcony and could wait no longer. However, we were made to wait outside the property for a good few minutes before being let in by Debbie, who informed us that she had been watching dolphins play around in the sea below and hadn’t heard the buzzer. We totally understood and nodded in solidarity. 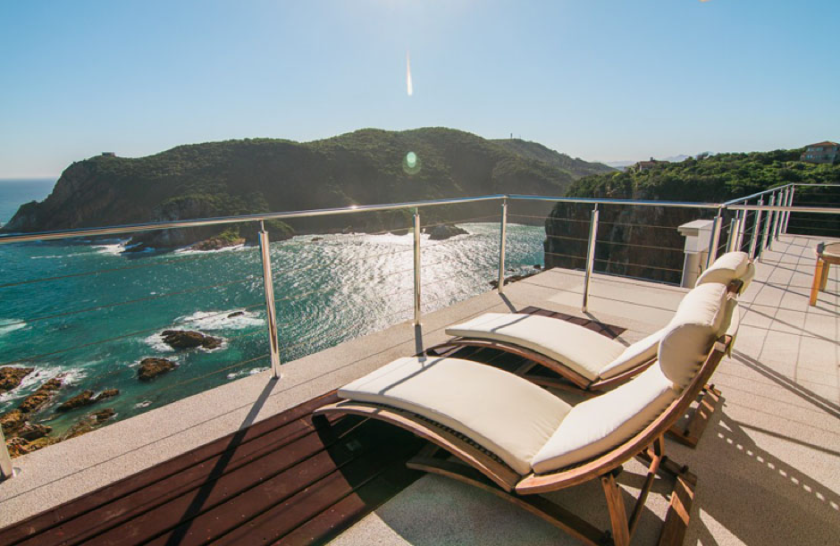 The retreat consists of 4 suites and 4 deluxe rooms. We were shown to the Captain’s Suite and were greeted by the most stunning hotel view that I have ever seen. The whole width of the room consisted of glass doors which could be folded out to open the room onto our private balcony. We decided pretty quickly that this is obviously what we would do and then settled down into our sunloungers with a couple of beers to soak it all in. Whilst the views are clearly their selling point, the rest of the room was also excellent. It was clean and spacious, with a cosy log fire for the chillier evenings. The Smeg fridge was stocked with plenty of soft drinks, including complimentary beers and still and sparkling water. There was also an Nespresso machine, much appreciated by Joe, with complimentary tea and coffee and Le Creuset cups and saucers. The bathroom took up half of the room and included a large shower, double sinks and a Jacuzzi bath from which you could enjoy the exceptional scenery. However, my favourite part of the room was the bed. Three of the four suites have luxury Vividus beds, made by Swedish based company Hästens. They are labelled as ‘The World’s most incredible bed’ and retail for around £50,000, which is absurd. Each bed is made by hand from a recipe of natural ingredients, including eight different layers of horse hair and slowly grown arctic pine, and takes about 150 man hours to make. I had the dreamiest nights sleep that I have ever had on that bed, it felt as though I was sleeping on candy floss and purring kittens. But is any bed worth £50,000? A more relevant question is: will I ever be in a financial position where I might need to make this decision? Probably not.  However, there aren’t many hotels in the world where you get to sleep on such a luxurious bed and I would be keen to pay the extra for a suite if we stayed here again, purely for this reason. As we weren’t quite sick of the scenery just yet, we decided to eat at the hotel restaurant for the evening. The restaurant looks out on to the shared balcony and infinity pool and you can enjoy the same views of the heads whilst enjoying your evening meal. The menu isn’t particularly adventurous but the food was tasty and perfectly cooked. You can pre-order oysters in advance, but since I’d forgotten to do this, I went for the mussel pot instead which was really nice and spicy. Joe had the venison carpaccio and we both had the springbok loin for mains. All of the dishes were served and explained by the chef which was a nice touch.

When we made our way back to our room in the evening, the room had been turned down and we had been left two small bottles of amarula as a nightcap. There is also an honesty bar downstairs where guests can help themselves to an impressive selection of South African wines, beers and spirits when there are no staff around, so there’s no danger of running dry. Head Over Hills has a very good balance of providing a warm and helpful service whilst at no point making you feel harassed – a great quality for a small hotel as I’ve found that they can sometimes feel slightly overbearing. An extensive breakfast is also included and served in the restaurant. There is an assortment of cold and hot dishes and some bubbly to keep everyone happy. The view from Head Over Hills really is stunning and we spent way more time in the hotel than planned because of this. If you’re after some ultimate relaxation then you will not be disappointed here. The service is a little more laid back than in most 5* hotels, but this isn’t necessarily a bad thing if you enjoy being left alone. Prices per night range from R3400 (£195.00) for the twin Oyster room, to R6600 (£375.00) for the Elephant Honeymoon suite, and our Captain’s Suite was R5700 (£325.00). The hotel is often fully booked during peak season (Dec-Feb) so booking well in advance is advised.