I bought my mum a train ticket to come to London for Mother’s Day this weekend. I normally go back home rather than her visit me but I really wanted to treat her this weekend. She arrived on Friday afternoon and I met her from the station. I had decided mid week that we would go for a Moroccan – partly because I have been wanting to try a Moroccan restaurant just off Portobello Road and partly because she mentioned that she would love to go for some Moroccan food.

I’m not sure where I had heard about this place but I know that the name and a description by one person ‘a hidden gem’ stuck in my head. So off we went to Ladbroke Grove – I have only ever walked down Portobello Road when the market has been on so it was quite odd to see next to no people around, even the pubs weren’t busy. We had a couple of girly wines and walked to the address that I had written down on a post it note earlier on in the day. We arrived and from the outside it looked like a kebab house – although there was no food in the counter or meat on the kebab machines. I thought that there would be a restaurant area in the back – I was wrong. We walked in and saw three small children running around and a few adults standing. The gentleman who turned out to be our waiter asked us where we wanted to sit – I couldn’t believe that we might actually have to sit in the front ‘kebab’ looking room. I saw a room through the back but the tables and chairs were all stacked on top of each other. When asked ‘would you like to sit through here’, we of course said yes and the waiter proceeded to un stack the tables and chairs.

I knew that I had made a bit of a mistake but all that kept going through my head was that I had read that the food was fantastic and very well priced. We got the menus and sure enough the food was cheap as chips. We ordered three starters – lentils, white beans and hummus (the latter not being on the menu – we had to ask for it). The food came quickly and the waiter bought us napkins but no plates. My mum asked for some plates and the first of three funny comments to leave his mouth during the course of the evening came. ‘Ah, I wondered if you wanted plates. I’ll just get you some.’ The laughing had started – I must let you know though that we were laughing at the experience, not the waiter. He was an absolute delight, striving to make sure that we had a wonderful experience in the dead cafe/restaurant/kebab house that we had chosen for our Friday evening treat.

I had a feeling that the food would be good, despite my company disagreeing with me and I was so right. The hummus was fresh, a little salty but smooth and just how I like it. 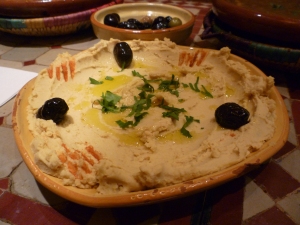 The lentils were a delight and the white beans were my favourite – tasty and packed a punch.

After the first round, we were starting to fill up so only ordered one main to share – I wanted the lamb tagine but my mum doesn’t like lamb (something that I’m not overly happy about) so we got chicken. It came sizzling away in a small authentic tagine and came with carrots, potatoes and mango (not mentioned on the menu much to my boyfriend’s dismay). It was tasty although the sauce was more water and chicken stock based than the thick prune sauce that I was hoping for with the lamb. 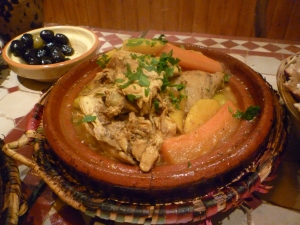 We also ordered a side of spiced potatos, which despite tasting beautiful, were a glorified potato wedge with some paprika sprinkled on the top.

Too full for pudding or a even a coffee, tea, hot chocolate or mint tea, we asked for the bill. It was comforting to know that £18 ensured that the three of us were all full to the brim and our taste buds had been entirely satisfied. Now, although the experience might not have been somewhere you’d want to take a date (or your mum, unless she has a good sense of humor – luckily mine does), it’s a good place to get some good, honest and authentic Moroccan grub. The waiter, if I am allowed to say this, was the star of the show. Refering to my mum and I as my boyfriend’s ‘Mrs’ and telling us that it is cold outside so we should take the warm radiator outside with us, he was a delight. After hearing that it had been a pleasure serving us and that he hoped to see us again soon, we left into the cold drizzly night to travel home.

I think we’ll all agree that it was an evening that none of us will forget and it is highly likely that I might actually see that waiter again soon.

Forget chicken, scallops are where it’s at