Whenever my friend Lucy and I meet for dinner, for some reason we always end up eating pizza. We used to frequent Pizza Express fresh out of university, 50% off voucher in left hand, pizza slice in right. But on Wednesday evening we tried somewhere a bit different.

Fire & Stone has been around for a few years. I visited a while back to enter a competition to create a pizza named after a European city – the winner got to go on holiday to the city. Mine wasn’t the winning pizza unfortunately so I didn’t get to jet off to Seville but I thought I’d head back to try a couple of new additions to the menu.

Fire & Stone Spitalfields was buzzing on a mid week evening with post workers enjoying pizzas inspired by and named after cities from around the world. The new pizzas we were there to try included the Canberra and Trinidad and Tobago. We were offered thin and crispy for £1.25 extra so we opted for the Canberra to come on that base, following the waitresses recommendation. 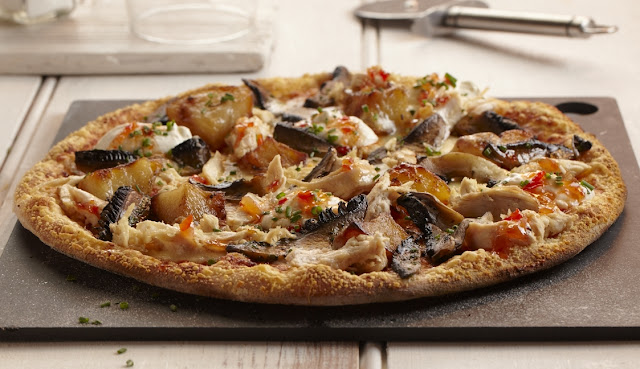 Fire & Stone pizzas are hand stretched, topped with parmesan and stone baked, something I hadn’t been too fond of before but my mind was changed on Wednesday. The Canberra was my favourite with a topping of roast chicken breast, garlic & rosemary potatoes, marinated mushrooms, mozzarella, sour cream, sweet chilli sauce and chives. The Trinidad and Tobago was topped with spicy pepperoni, fresh red and green chillies, jalapeno peppers, mozzarella and tomato salsa and despite enjoying it, I felt that it didn’t have the same depth of flavour – it was extremely spicy but we both had to peel off a fair few chillies so that we could actually taste everything else.

The pudding list landed in front of us as soon as we had wiped the last crust in chilli oil but neither of us could face it – the pizzas had well and truly won the battle.

Fire & Stone wins against Pizza Express any day, but I still have my reservations whether it can beat the Italian sour dough kings, Franco Manca and Santa Maria, that I love so much.