I bloody love the London dining scene. Whenever I think of setting sail to live in another country, there are two things that stop me in my tracks – my mum and the incredible restaurants I have become accustom to in, let’s face it, one of the most amazing cities in the world. 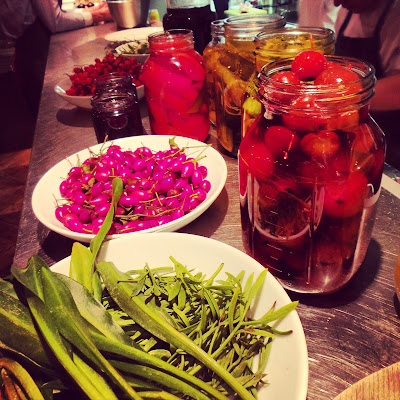 The week before I left for my Melbourne adventure, I was invited along to One Leicester Street with a group of fellow bloggers to try a specially created pickle and cured meat menu by Chef Patron, Tom Harris.

I hadn’t been anywhere near the building since it was St John Hotel and I was so pleasantly surprised when I stepped into the bar. Gone were the cheap plastic furnishings and sterile atmosphere and in their place was a suave and sophisticated bar with soft lighting, mirrors and dark comfortable furnishings. After enjoying a pickley cocktail, we headed downstairs for the remainder of the evening. 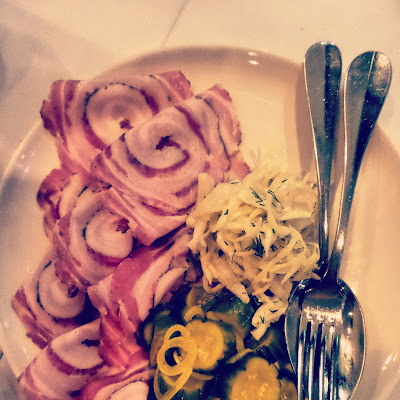 Downstairs, we all lined up at the pass and listened to Tom tell us about his pickles. Lined up along the front were jars of vegetables, which had been pickled and fermented, including gherkin, dill and crab apple, to name a few. Tom explained that he particularly likes sweet pickles and this is done by adding 1 part sugar, 1 part vinegar and one part water and you can use the leftover juice for cordials. He went on to explain that fermented vegetables pickle themselves and all you need to do is put them in a light salt solution and leave them in a hot temperature. Tom leaves his in the kitchen, which is between 28-35 degrees. He added that the salt solution stops the nasty bacteria but allows other ones to thrive. 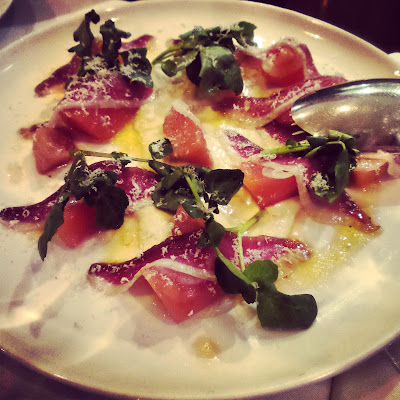 We sat down and shortly after tucked into a seven course meal. We enjoyed incredible pig’s cheek ham with celeriac and mustard, which literally melted on the tongue, middlewhite belly and tongue ham with sour cabbage, raw dexter with pickles and rye, devilled mussels with sea aster and cider and St Jude with pickled fennel and rye cracker. The only dish that I wasn’t so sure of was the pickled quince with smoked duck ham. The duck and quince were both delicious in their own right but when paired together, the quince totally overpowered the duck, which was a shame. 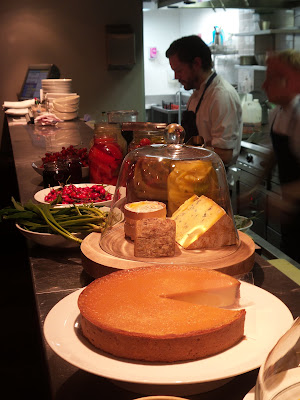 After an evening of pickles, I was glad to see that Tom hadn’t crafted some sort of bonkers pickled dessert. Instead, we were treated to the infamous brown butter and honey tart. The custard on the tart had the best wobble I had ever seen and I thought it was going to melt just by looking at it. The pastry was buttery and rich and just the perfect thickness.

When the evening drew to a close I became a little sad. I wanted to keep eating Tom’s pickled goodness. But as they say, all good things must come to an end. I’m not too bothere though as I have little doubt that One Leicester Street is going anywhere fast.