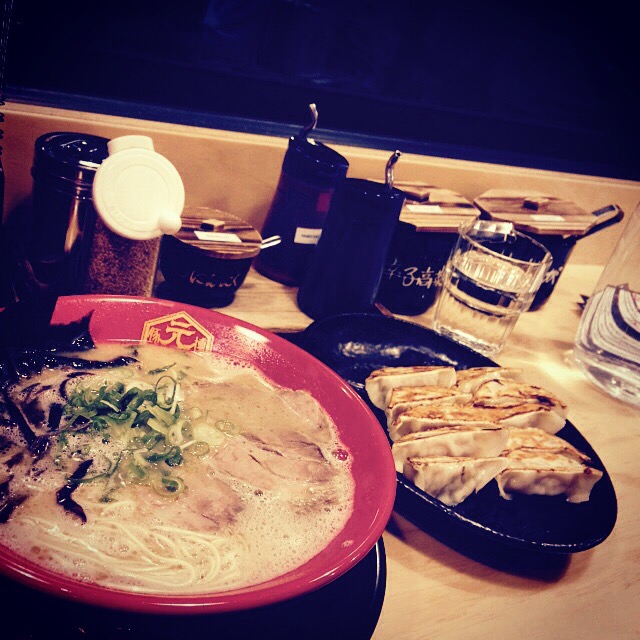 Experience
Gensuke doesn’t do much for my longing to go to Japan. Having popped into work to take a few snaps of a beer tasting on Thursday night, I decided that going home to cook my solitary aubergine just wasn’t going to cut it. I was going to try a new pizza joint, but as I approached I stopped in my tracks, turned around and headed to my car. I had remembered my friend telling me about an amazing Hawthorn ramen shop on Glenferrie Road, so I whipped out my phone and with a minute had tapped the address of Gensuke into my sat nav.

The first thing that struck me about Gensuke was the lighting; the glow was so bright that I could see it from where I parked my car a good 50 meters away. Undeterred, I ventured through the door and was greeted by a chorus of Japanese waiters and chefs communicating to each other in harmony. A smile emerged across my face and I knew I had made the right decision. Throughout my meal I was tempted to ask what they were singing, but despite my curiosity I decided to maintain the intrigue and instead give the passing giggling waitresses a knowing smile.

Gensuke is everything I love about an informal restaurant – you tick the boxes of the dishes and extras you want to order and it’s so uncomplicated that even me, the most indecisive of the indecisive, chose in one minute flat. The food arrived a few minutes later, which gave me the opportunity to play with the toys in front of me – a sesame grater, soy sauce and ramen bottles, jars full of garlic, spicy pickles and red ginger. I had it all. Why not?

I wanted to try more than just the bowl of ramen, so also ordered a portion of gyoza, not realising that I had ordered ten of the little blighters. It seemed a bit over the top at first, but within minutes I was dipping the last of the gyoza into my ramen broth, sliding it between my lips and washing it down with a glass of water.

You can’t buy booze at Gensuke, but it doesn’t matter; it’s not the kind of place you linger for ages. Instead, I slurped my broth, chowed down on my noodles and left quick sharp, full, totally satisfied and still with change in my purse.

Suitable for a lone diner? A resounding yes

Average cost: $20 for ramen and gyoza