London has long been a multicultural city with a vast amount to offer, even to the seasoned traveler. It has also been an admirer of Asian culture for many a year. You only have to look at Chinatown just off Leicester Square to witness the hoards of ravenous professionals that descend upon West London each night at feeding time to see how fond of Asian food the British are. And the buck doesn’t stop there – the British embrace many Asian traditions but a Japanese-themed hotel situated in Gatwick Airport caused quite a stir when it was opened among the British media. 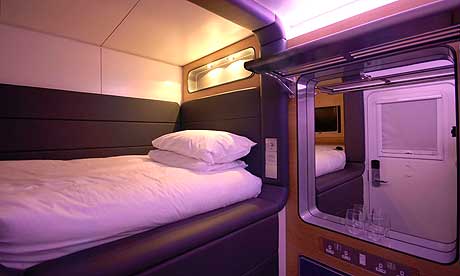 YOTEL was launched in London’s Gatwick back in 2007 and introduced the British public to Asian ingenuity at its finest. Many had read about the Tokyo hotels that were built under the design dynamics to cater for short stay visitors via a series of pods or compact cabins, if you like. It was something that was completely foreign too, to the British consumer. British hotels are renowned for being characterless boxes that exhibit nothing but loneliness and are the polar opposite of homely retreats. Now, we aren’t saying YOTEL’s Japanese-influenced luxurious cabins are by any means homely BUT they are inventive, contemporary and extremely intriguing.

YOTEL’s business model is built on order, reform and the utmost of cleanliness – all traits Asia is renowned for and something British hotels are scarcely missing. So, from a British consumer standpoint, YOTEL was an extremely interesting prospect. Not to mention, no other type of hotel in Britain gave its guests the option of an hour sleep at a reasonable rate, if needed.

When YO! founder Simon Woodroofe OBE, drew up the plans to launch YOTEL in London, he knew drawing influence from Asian ingenuity especially, regarding making the most of limited amounts of space, would be not only an intriguing prospect to the consumer but a very profitable financial action plan.

Their motto: “First class experience at an affordable price,” also resonates with the consumer. The contemporary design, flexible efficient spaces were ideal for businessmen and women to unwind after arduous journeys and what could be more practical that building it adjoined with Britain’s flagship airport. All their cabins are fitted with the flat screen TVs, free Wi-Fi and shower areas. It’s also only a shuttle ride away from the main terminal and the airport’s parking facilities as per Parking4less.

However, not even Woodroofe could have imagined how much, what was essentially an Asian idea, enthused with contemporary Asian aesthetics, could have been so successful in Britain.

British hotels have a lot to learn but if they take heed of how design, efficiency, spatial utilization and affordability play on the consumers mind, they could still be in with a fighting chance.

The YO! brand have also launched a similar hotel in New York, watch the video below to have a peak at its premium cabins: