“I literally have no idea where this place is”, I mumbled as I wandered down a dimly lit alleyway in Tokyo’s upmarket Shinjuku district, spying thorough windows of restaurants that were not the one we were looking for. It was 5.30pm and we had been saving ourselves for dinner most of the day. And I was on the verge of severe hanger. Luckily, lunch.money saved us both by popping into a local bakery to ask directions. The young cashier took his phone, turned it around what must have been about 5 times and scratched her head. Finally, her eyes lit up and she ran out of the shop, gesturing for us to follow her. She took us down a side road and pointed to an unassuming doorway, which looked like it belonged to a block of flats. This was to become a common occurrence on our trip, we soon realised.

Once we had finally located the restaurant, we waited outside before realising that the wooden lattice door was ready for us to slide open and step inside. Whether it was the jet lag, or just complete and utter difference to what we’re used to in London, I’ll never know. As soon as the door started to open, we heard a multitude of Japanese men almost singing in unison. A smartly dressed chef appeared quickly out of nowhere, took our jackets and ushered us into the restaurant.

I had heard that dining in Tokyo is a small and intimate affair, which is why I had wanted to visit for the last decade. Paired with the fact that Japanese is one of my favourite cuisines, you can imagine how excited I was to be dining at a two Michelin starred restaurant, which features a mere 10 seats at the bar, right in front of the Head Chef and his lone goldfish, swimming behind him in an underwater bonsai garden. 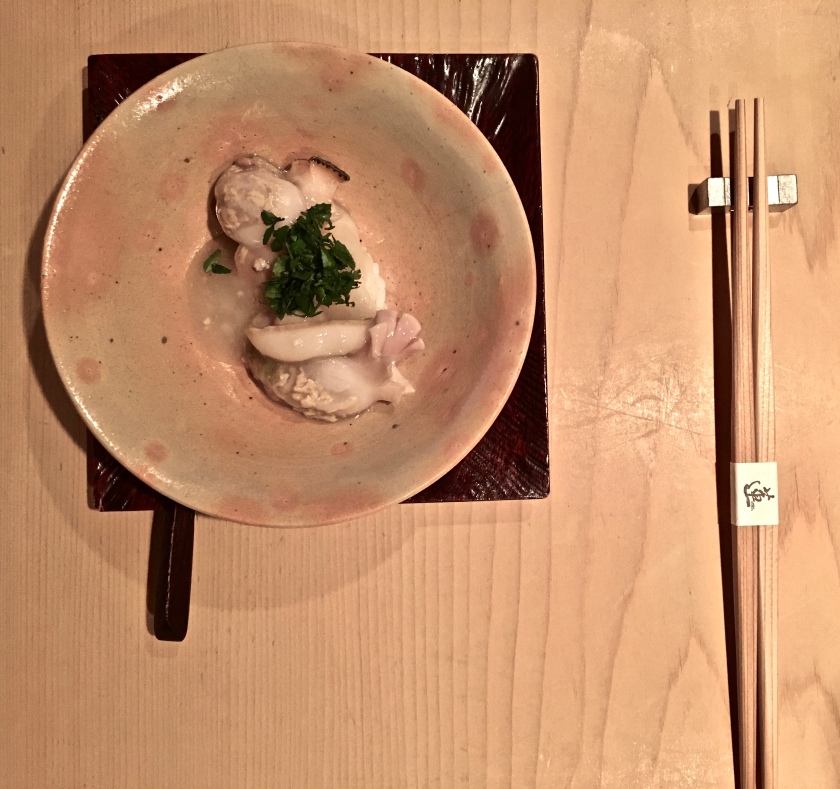 Chef Jun Mishina stood before us, smiling and calm. Having worked as Nikata chef at three Michelin starred “Ishikawa” from age 23, he became the Executive Chef at “Ren” when he was 30 years old. Now 32, he’s obviously doing something right.

As with most high end restaurants in the city, we were offered a set menu of ten courses.

First thing’s first though, let’s order the wine. Ok ok, I bet you’re asking why we were drinking red wine and not Japanese delights. And I’m sorry, but I don’t actually have an answer, other than we just bloody love red wine. We also knew that if the restaurant we’d been to a couple of nights before was anything to go by, it would be the right choice.

We chose our bottle, a delicious bottle of Cabernet Sauvignon from Napa Valley, which set us back £100 (I know, but that’s the price of fine dining in Tokyo) and one of the junior chefs scurried away behind a curtain, returning minutes later with a thimble of the wine for Chef Mishina to taste. With a nod of the head, the junior was back behind the curtain to retrieve the bottle before pouring for us. That little thimble ritual epitomised the Japanese service culture. If it’s not good enough for a Two Michelin starred chef, it’s certainly not good enough for the customer.

Now, onto the food. The first course was the most memorable. Was it because it was the most delicious, or because Chef Mishina cooked it in front of us on a charcoal grill? Or was it because the more time went on, the drunker we got? I have no idea, but let me tell you, Bamboo that has been boiled for an hour, then brushed with soy sauce and cooked on a charcoal grill centimeters away from you is very satisfying. Add the white miso, egg and yuzu sauce that it is served with to the equation and you have a dish that you won’t be forgetting in a hurry.

Oh, hang on. Did I say that the first dish was the most memorable? Hmm, ok, I might have been wrong. The next dish was pretty special, as I’d never tried it before. Have you ever eaten soft shell turtle? No, until then, I hadn’t either. But I bet you can imagine the texture, and I’m sure you’ve got it right. Served with soy sauce, water, sake and kelp – this dish had an amazing balance of flavours.

The only dish I wasn’t so keen on was what Chef Mishina affectionally labelled ‘danger beans’, which was essentially a slightly bland charcoal grilled broad bean patty that was so hot when you bit into that if we had been too impatient, could have ruined the rest of our meal. 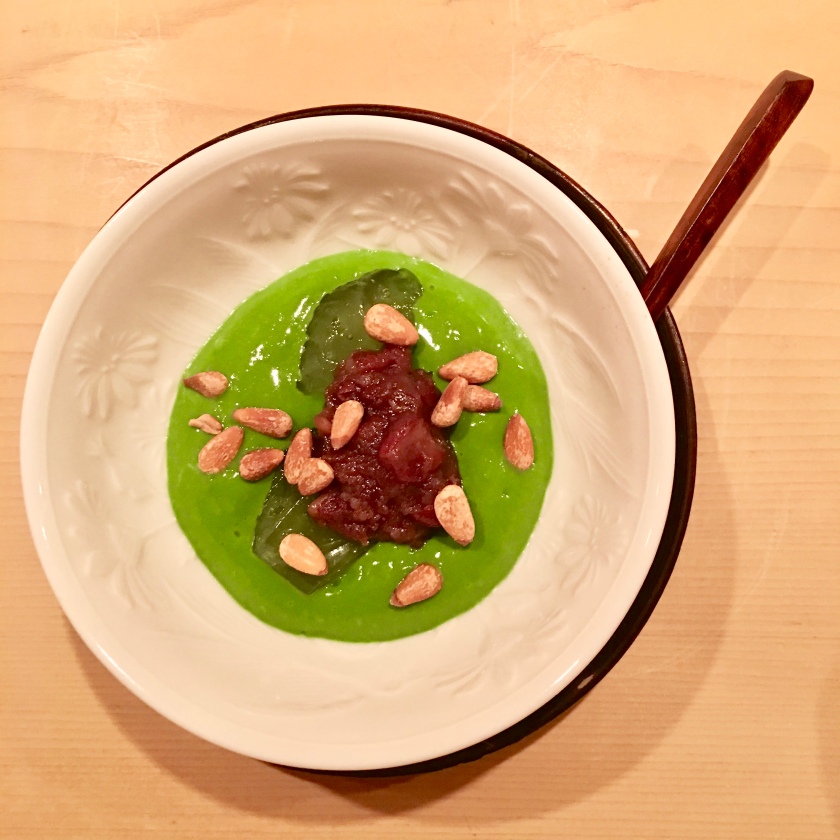 Other dishes we enjoyed were raw snapper, sourced from the infamous Tsukiji Market, served with creamy monkfish liver, canola flower and ponzu sauce; Abaolone, which had been steamed for four hours; and Sea Perch, which was delicate and well seasoned, skin perfectly crispy.

Ok, now I really am being silly, because the last savoury dish was definitely the most impressive. Was it impressive because it was simple, or because it was so damn tasty? Probably a bit of both. A clear broth with slices of Japanese beef, half a white onion and plum paste. That’s it. Don’t believe me? Well, maybe you should go and try it for yourself.

For the first half of our meal we were sat alone at the bar. It dawned on us pretty quickly that we were essentially enjoying a private dining experience with one of the best chefs in the world. What could be more satisfying than that? After the meal, Chef Mishina joined us for a quick photo before we grabbed our coats and headed back into the intoxicating hustle and bustle that is Tokyo. But one final surprise lay in store, when as the lift doors were closing, Chef Mishina appeared in front of the doors, bowing and wishing us a good evening. Smiling and laughing, the doors closed and we travelled down to the ground floor in silence, ready for the next stage of our evening.