I had been here before on a dodgy business breakfast meeting at a previous job and I rather enjoyed it. Very good scrambled egg I thought and you can never go wrong with a good bit of smoked salmon. So when I saw the offer for 50% off the a la carte menu on Toptable I couldn’t resist.

My dad was due to take me out for dinner and I thought it would be good to save him a few pennies too. My boyfriend joined me and we arrived half an hour early. That was no problem as we could sit in the comfortable ‘snug’ area as they like to call it. I had a wine and Jack caught up on some emails. I ordered the drinks at the bar but they seemingly forgot about us and after 15 minutes, the waiter who I ordered with popped his head around the corner and made a face, a face that told me he was shocked and sorry! They were then very quick to arrive.

We sat down and pondered the menu. I ‘d already had a sneaky peak online so I knew what I wanted! I had deliberately saved room during the day as I knew I was in for the long haul. 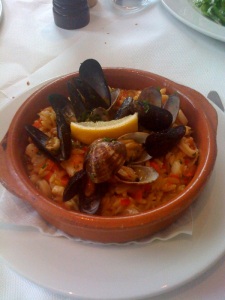 Jack – Grilled squid & chorizo with borlotti beans, capers & anchovies followed by “Orzo” seafood paella and an espresso to wash it all down. 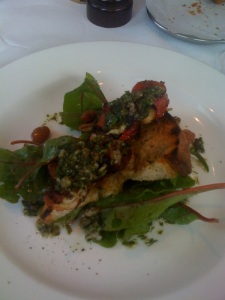 Dad – Crab salad on toast with avocado, lime, chilli & grilled peach followed by Whole roasted lemon sole with Piquillo peppers & panzanella and a coffee to wake him up for the long drive back to my hometown. 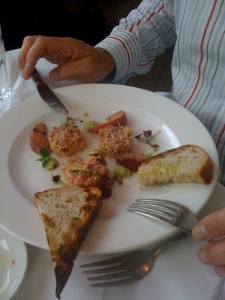 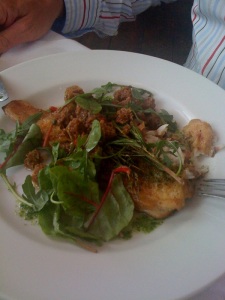 Now, I can only speak for my own food (although I did try a morsel of the other dishes) but my starter was fantastic. I would never usually think to pair prawn with pork and chorizo but it was heaven in a mouthful. I’m always a fan of purée so the sweet potato purée was an added delight. The main arrived and looked small (I’m a big eater) but I didn’t finish it, not because I couldn’t but it was getting, well, boring. I’d had an orzo risotto at Harvey Nichols and worshipped it so I was expectig big things. Alas, no. Jack demolished his and polished off mine.

Greek yoghurt sorbet, isn’t that just a fancy way of saying frozen yoghurt? It came with an excuse from the waiter (who I’ll get to later) that it had not been made long ago so was served in a small (chipped!) ramekin and was a little runny. Surely if they knew they were going to have a busy service this should have been prepared well in advance?! The pie didn’t have strong flavors, in fact it was quite bland but the texture is always a winner.

My dad was convinced that the waiter was from Croatia despite him having a thick and unmistakable French accent. I think what he was trying to say was that it sounded put on, over the top it was. He brought us the wrong bill after us asking for it twice. In his defence there only seemed to be two waiters for the whole restaurant, which by the time we left was nearly at capacity!

The end of the evening was nigh and it was bill time. Add a couple of glasses of wine into the mix and the total came to £70 with service charge, not bad!

The Zetter is your typical East London hotel/bar/restaurant. I would recommend it but I doubt i’ll be rushing back.