I wish I had known Anna, the seventh Duchess of Bedford, for she is (was) a lady after my own heart. If she hadn’t ordered tea, bread, butter and cake to her room in the late afternoon all those years ago in the 19th Century, we may not have the glorious delights of what has become Afternoon Tea today. As the story goes, Anna used to get so hungry during the afternoon hours and simply couldn’t wait until 9pm for dinner so ordered the sustinance to cure her hunger pangs.

Fast forward 173 years and Afternoon Tea is a huge trade for the hotel and restaurant industry. All of the top hotels in London serve their own twist on the quintessentially British tradition. I have tried a fair few teas over the years, some good, other’s somewhat ‘interesting’, but I haven’t even made a dent on the number that I still have to experience. 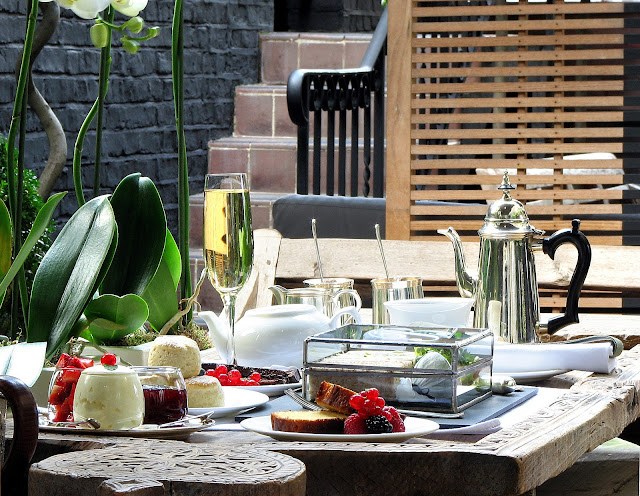 My mum was visiting for a couple of days before Christmas and she shares my love for cakes, dainty sandwiches and tea so we headed to Blakes to test out their Afternoon Tea. Blakes is located in the leafy Royal Borough of Kensington and Chelsea and is famous for its stunning design, elegance and dedicated service.

Afternoon tea at Blakes is served in the subterranean and sensuous spendour of the stunning Chinese Room in the basement of the hotel. We opted for the Champagne Afternoon Tea and we were served with a glass of Champagne on arrival, followed closely by our choice of Jing tea and finger sandwiches.

We received our own plate of sandwiches and our own silver pot of tea. The bread on a couple of my sandwiches was ever so slightly hard, which could be a result of it sitting out in the open air for too long but the fillings were fresh and despite ranging from original cucumber to chicken and ginger, complimented each other perfectly.

Our empty plates were taken away from us and replaced with a plate of four freshy baked, warm scones fresh from the oven, a pot of cream, little pots of jam and fresh strawberries. The waiter then returned with another plate full of Blakes Afternoon Tea speciality cakes. 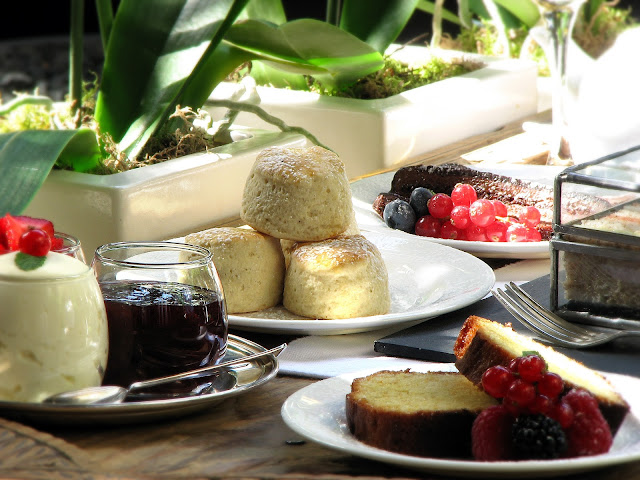 We tucked into the scones first to ensure that we devoured them whilst warm. We smothered jam first and the smeared a thick layer of cream on top (the Cornish way – read all about the furious debate between Cornwall and Devon in 2010 here) and ate. Wow. Delicious. We were slightly disappointed that the cream wasn’t clotted but nevertheless it was deliciously sweet and filled with little specks of fresh vanilla.

The four speciality cakes clearly had oriental influences to match the surroundings but not all of them lived up to the standard set by the scones. We also couldn’t possibly eat everything – four cakes, four scones and a rage of sandwiches for two people is some going.

One more glass of champagne later and we were stuffed to the gills. During our visit we were the only diners in the restaurant but perhaps it was a combination of the fact that Afternoon Tea isn’t overly popular in the winter and it was two days before Christmas. We weren’t totally alone though – a few hotel guests were loitering in the bar area drinking espresso martinis to help combat jet lag and striking up conversations with one another.

My mum was overjoyed with the experience and we both secretly wished that we could retreat to one of the luxurious rooms for a quick nap before heading back home for Christmas. I’ll be back to Blakes in the summer to try the tea in the calmming Japanese Garden.

Food for Think was a guest at Blakes