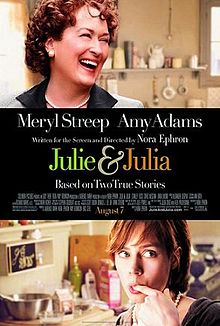 Nora Ephron (When Harry Met Sally, Sleepless in Seattle, You’ve Got Mail), one of the greats of the film and comedy world, sadly passed away last year. Her best films became cultural moments, with characters, scenes and lines that live far beyond the films themselves.

From 24th-27th January, The Loco Film Festival is focusing on women in comedy and has teamed up with The Lexi Cinema for a special tribute to Nora. The Ephrathon, on Sunday 27th January, will showcase three of her best-loved films, one from each era of her career: Heartburn (starring Meryl Streep and Jack Nicholson), Sleepless in Seattle and her award-winning final film Julie and Julia, which stars Streep alongside Amy Adams and Stanley Tucci.

Guests can also take part in a fruit pie competition, which will be judged by Sophie Grey of Crazy Baker. The winner will receive a signed copy of Sophie’s book ‘Let’s Make Whoopies’ and a year-long membership for The Lexi Cinema.

Food for Think is giving you the chance to WIN two tickets to the event at The Lexi on Sunday 27th January. There are two ways in which you can win:

1. Leave a comment below with the answer to this question – Who plays Julia Childs in Nora Ephron’s award-winning film Julie and Julia?

2. Tweet the following – ‘#WIN 2 tix to The Ephrathon at The Lexi Cinema on Sunday 27th Jan. RT and follow to win @foodforthink’

Competition ends on Monday 21st January at midday and the winner will be chosen at random. If you don’t win, you can always buy tickets here.

Please note that no physical tickets will be posted out, your name will be added to the guest list.