I have often said that Italian is my favourite cuisine, although my experiences over four years that I have been writing this blog have shown me a whole range of exciting cuisines. The Eat the Olympics challenge that I started this time last year with my boyfriend also introduced me to foods from countries that I had never even heard of before. You can see how we got on here.

But despite all of the delicious new dishes that I have been subjected to, a good pasta dish can still win hands down. One of my favourite restaurants for pasta at the moment is Banca on North Audley Street. It is expensive so unfortunately for me can only be a treat but this high end Northern Italian produces a range of home made pasta dishes and the veal cannelloni tops one of my all time favourite pasta dishes.

I visited Moreno at The Baglioni Hotel a few days ago and was looking forward to my visit like a child waiting for their annual trip to Alton Towers. Moreno Cedroni runs three restaurants in Ancona – one of them the two Michelin-starred fish restaurant La Madonnina del Pescatore. So anticipation was high. 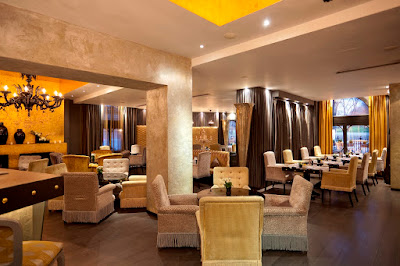 We drove through London on the first snowy evening of the year and snagged a parking space right outside the hotel. As we entered, a welcome wave of warmth hit our cold faces and we were shown through the hotel bar to the restaurant area where we were seated next to another couple who were just finishing up.

The first waiter of the evening arrived and provided us with the menu. A short explanation later and we were left to our own devices to choose our food. We settled on tempura scallops infused with cuttlefish black ink served with clam and courgette sauce and “The Ugly Duckling”: black poached egg, swordfish cooked at 35°, pizzaiola sauce and crispy salad to start, followed by a small portion of Tortellini filled with 24 month aged liquid parmesan, finely chopped raw beef, tomato sauce and balsamic jam and a mixed salad with almond sauce and Moreno’s mustard dressing for our second course, which was followed by warm sea bass carpaccio, lime mashed potatoes and rocket sauce and potato gnocchi with ragu bolognese and cacio e pepe sauce for main. But first up we were treated to a pre starter of rich, creamy and delicious Parmesan foam and a bread basket consisting of Carasau, white and brown baguettes and two squares of cherry tomato focaccia. The second waiter of the evening was over to provide us with a small dipping bowl of good quality olive oil and not so good quality balsamic vinegar. The vinegar was so potent that too much made my eyes water. I opted for no balsamic for the second pour so that I could savour the delicious olive oil.

The starters arrived and despite a lot of black on the plates, both dishes were presented well. I cut into my black poached egg and was left unsure as to why they had bothered to turn it black as it didn’t taste any different to a normal poached egg. Nevertheless it was cooked perfectly and the deep orange yolk poured out all over the plate. The swordfish was meaty and tender and the flavour lifted by the pizzaiola sauce. We ate half of our dishes and swapped plates. The tempura scallops were slightly less thrilling – the batter was gloriously light but slightly masked the tender flavour of the scallop. The whitebait gave the dish the extra crunch and the sauce was the extra element that was needed to bring all of the flavours together. We mopped up some of the remaining juices with bread from the basket before it was whipped away and replaced with a fresh one. We were unsure why as we had only really eaten the small squares of focaccia and a couple of the baguette slices. Still, we were glad that we had another piece of foccaccia each. 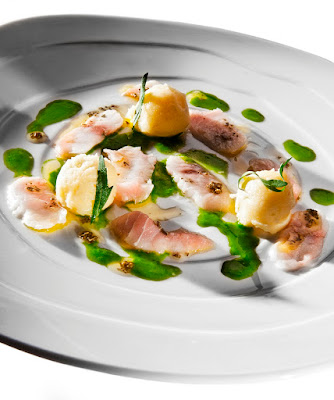 The third waiter took the empty plates away and a fourth waiter produced our salad and tortellini. Waiter number two explained that due to the fact that the filling of the tortellini was liquid, it is suggested that you place a whole piece in your mouth and chew. We took his advice and placed a whole piece in our mouths and chewed. We were delighted with the result – a warm and strong parmesan liquid burst out onto our tongue and lingered until the next bite. Neither of us detected the balsamic jam and preferred to eat the beef carpaccio on it’s own as the flavour was lost when eaten with the strong parmesan liquid. We devoured the dish and wished we had just a few more parcels to pop. The salad was a delight both on the eye and on the tastebuds. Shaved crunchy carrot and celery were surrounded by leaves and edible flours and coated with a moreish almond sauce and mustard dressing.

Just as the plates were taken away, so was the second bread basket and we were surprised to yet again see it replaced with a fresh one. At this point we couldn’t contemplate eating the extra bread as we were starting to feel full and knew that we had a lot of food to come. The mains arrived and I enjoyed the presentation of the sea bass carpaccio. Thin layers of sea bass arranged into a rectangle shape were surrounded by rocket sauce. A small scoop of lime mashed potato was placed in the centre of the plate and decorated with a sole rocket leaf. I took my first mouthful and was pleasantly surprised at the flavour combination. The dish was a delight, apart from one little element – the lime mash potato was lumpy. I was surprised because I didn’t expect a restaurant of this standard to serve lumpy mash potato. It wasn’t too much of an issue as the mash wasn’t the main element of the dish and the lime flavour made up for it. We swapped again half way through and I devoured the remainder of the gnocchi. It was soft, chewy and rich – everything that a good gnocchi should be. The accompanying ragu sauce was thick and extremely flavoursome. 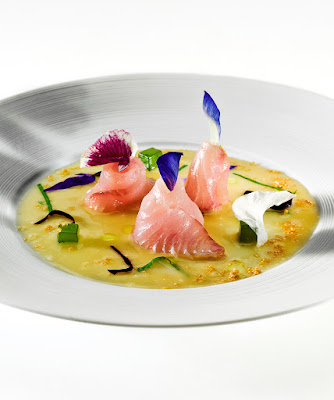 The dishes were taken away and we were left pondering whether we could face dessert. We quickly decided that it would be a shame not to try one so ordered the “Castagnoli”: fried profiteroles filled with Chantilly cream served with chocolate and lime sauce and tangerine sorbet and the Italian cassata with pine nuts, candied fruit and raspberry sauce. But first, we were treated to a pre dessert cappucino mousse with lingue di gatto, cat’s tongue in English, named so because of the shape. Moreno likes to use mousse in his cooking. Firstly there was the Parmesan mousse pre starter, the liquid Parmesan is in mousse form before it hits boiling water and Jack had a dollop of the same Parmesan mousse on the gnocchi. Then there was the cappuccino mousse, which was thick and creamy but I thought it was a bit too rich as a pre dessert so I didn’t finish it.

I received three scoops of cassata, which were drizzled with a bright red raspberry sauce. The traditional Italian cassata is made with mascarpone but the Moreno style cassata is made with cream, which supposedly makes it lighter. I tucked in and the taste and textures were fantastic. The crunchy pine nut, the cream and the chewy fruit all matched perfectly. Jack’s dessert resembled three small doughnuts and was covered with a rich chantilly cream and extremely flavoursome scoop of tangerine sorbet.

As our plates were taken away, we thought it was over. But no. Waiter number five placed two clear pieces of plastic in front of us. On the plastic was a printed map of Italy split into regions. He brought a plate of chocolates and placed three down on the map.We had a hazlenut chocolate from Piemonte, a tomato and basil white chocolate from Campania and a pistachio from Sicilia. We thought that this was a lovely touch and I enjoyed the chocolate from Campania the most.

As if three desserts weren’t enough, one more treat was to come. Waiter number two landed at our table with two mini Moreno magnums. I was focussing on the thought of eating yet more dessert so completely missed the description of the ice cream flavour. But I took one bite and was delighted with the creamy interior and crispy dark chocolate exterior. I had to give the rest to Jack to polish off as I just couldn’t do it. We knew then that we had come to the end of the meal. Eight courses later and we were ready to roll back out into the cold January night.

The verdict? Moreno didn’t quite live up to my expectations. There were flashes of brilliance with the tortellini and gnocchi and but the lack of seasoning and lumpy mash on the warm sea bass carpaccio dish was surprising. The tortellini and gnocchi dishes stood out from the rest of the dishes that we had on the evening. Is that just because I am a huge fan of homemade pasta dishes, or is it because this is what the restaurant does best?