It baffles me that despite the recession, a HUGE number of restaurants continue to open across London. Last year in particular saw a surge of new openings with a plethora of well designed foodie traps serving excellent quality food with innovative concepts. My favourite new openings of 2012 were John Salt (while Ben Spalding was still there) and Bone Daddies, which was at the forefront of the Ramen trend currently storming across London.

Another new opening was Naga in Kensington, which launched at the end of the year. I attempted to go in December but the endless Christmas plans got the better of me so I saved it for a January treat. Jack and I visited on a Thursday evening and when we arrived at 6.45pm, we were the only diners in the restaurant. We walked through the bar area towards the back of the restaurant and were impressed with the surroundings – the restaurant is split over two floors mezzanine style, covered by a glass roof and decorated by foliage and red silk screens embossed with Chinese script. 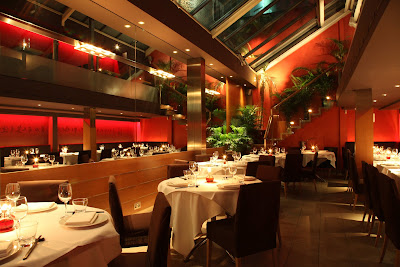 We were seated at a table at the far end of the dining room, which gave us a perfect view of the whole restaurant. We ordered a cocktail each and perused the a la carte menu. At first glance the menu had a range of influences, mainly Chinese and Vietnamese. We settled on the soft shell crab and tempura vegetables and a portion of the honey glazed barbeque ribs to start, followed by ¼ duck with pancakes and black cod for main. We also ordered a side of green beans with garlic and egg fried rice.

Jack’s cocktail was served in a dainty martini glass and mine in a larger glass resembling a small bucket. I ordered my cocktail because the combination of ingredients was different to the usual cocktail – ginger, lychee, lime and vodka topped with soda. And it didn’t disappoint. It tasted more like a soft drink and was easy to knock back. It was also deceptively alcoholic. I didn’t get a hint of vodka but certainly felt it.

The ribs were sticky, juicy and the perfect way to start the meal. The same, unfortunately, cannot be said of the soft shell crab. I have a penchant for soft shell crab and always order if I see it on the menu. The batter was thick and crispy and completely masked the taste of the crab. It also seemed that the vegetables had been added to bulk up the dish. Thin slices of peppers here and there didn’t make up for the tasteless crab. 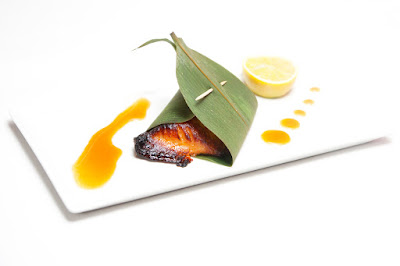 The mains arrived and anticipation was high. Black cod is one of my favourite dishes and can make me smile even when I’m having the worst day. We also ordered the ¼ duck with pancakes because we were wowed by the dish at another restaurant before Christmas. I placed a morsel of black cod in my mouth and let the fish do the rest. It was up there with the best black cod I have tried in London and I have tried a fair few. An absolute delight. The same unfortunately cannot be said of the duck. It wasn’t bad but didn’t live up to expectations. The duck was slightly dry, which didn’t ruin everything because the oyster sauce provided the moisture that the pancakes needed. We couldn’t help but compare to those pancakes that we had enjoyed a couple of months ago.

We also ordered another cocktail to accompany the mains. Again, we chose something unusual, a Naga speciality – Chinese Tea Cup, which consisted of Grey Goose La Poire with pear, elderflower cordial, lemon juice
and topped up with pink Champagne. It arrived and was beautifully presented in a clear tea pot filled with ice and lined with fruit. This cocktail was a delight and was again deceptive with absolutely no hint of vodka.

We couldn’t resist sharing a dessert and settled for the Keuh Dadar, a pandan pancake with peanut stuffing, served with coconut ice-cream. The pancake was an emerald green and had a lovely chewy texture. The peanut and coconut flavours went well together and the plate was clean in a matter of minutes.

Naga provoked a real mixed reaction from us. Some dishes were pure brilliance, while others were distinctly average. The cocktail list was unique and I would definitely go back to the bar area for a drink if I am around the area again.

Food for Think was a guest at Naga