When I lived in East London a few years ago, Shoreditch was the go to place for fun. I have lived in North West London for the last five years but I know that over the years the area has become a playground for City workers. The young creatives who used to frequent the area have since departed to the surrounding areas – Dalston and Hackney.

One young creative that I have known since I first moved to London is currently doing something that my nearest and dearest know I dream of – running an independent cafe and restaurant with her boyfriend. I had heard good things about The Hackney Bureau on Mare Street – the most delicious homemade cakes, a perfectly executed flat white and laid back surroundings in which to enjoy. I had also read about the varied and very good value dinner menu, including a specialty of theirs, braised beef cheeks – yes please!

Despite the cafe having been open for a while, I had never visited as I don’t tend to visit Hackney very often anymore. I knew this had to change so we found a free weekend in January and visited not once, but twice. The first time was on Friday evening. Jack and I joined my friend and her boyfriend plus a couple of other friends for dinner. Had we not known what the restaurant looked like before we arrived, we could well have missed it for it is purposefully shabby with no signage, save for a small sign that lay in the window. The interior is not much different. Mismatched furniture is dotted around the bare room, an open kitchen shows chefs hard at work and ply wood boxes hold speakers on the wall. The bareness is intentional and it lends itself well to the concept of the restaurant – simple and good quality ingredients cooked well. 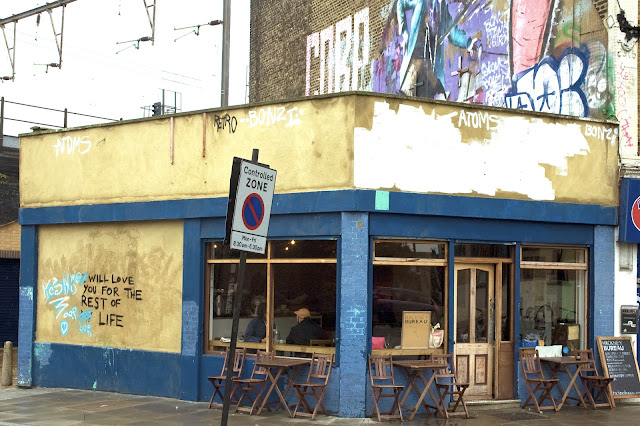 We consumed a range of delicious dishes during the course of the evening – Sourdough with extra virgin olive oil and dukkah (£3) and rollmop herrings with ratte potatoes, horseradish and watercress (£4) to start, followed by oven roasted buttermilk chicken with creamed leeks (£10) and braised beef cheeks with market cabbage and vichy carrots (£12) for main. The rollmop herrings were fresh and absolutely the best I have ever eaten. We all agreed that the buttermilk chicken was like ‘posh KFC’ – in fact, our friends revealed that they had wanted to call it this on the menu. We think they should! But it was the braised beef cheeks that stole the show. Wobbly, tender, juicy chunks of beef cheek were covered in a rich gravy and served with buttery cabbage and carrots. My mouth waters just thinking about it.

Not many of us could face pudding but I knew I might have to save a little room when I saw crème caramel on the menu. I don’t recall ever seeing creme caramel on a restaurant menu and I can’t fathom why. It was a staple dessert in my household as a child and I wanted to see whether The Hackney Bureau’s could rival it… and it totally could. A small, pert vanilla specked creamy blob arrived on a beautiful plate, surrounded by a caramel juice. I didn’t want to share with Jack but he stole a spoon and then went back for a second one, despite claiming that he ‘couldn’t possibly it anymore in.’

We left The Hackney Bureau on Friday evening and returned to try the coffee on Sunday afternoon. Did it live up to the high standards that I had read about? It certainly did. I’m very proud (if not slightly envious) of my friend. Along with her boyfriend they have created a laid back haven with excellent food and good service.

HACKNEY BUREAU is open from 7am on weekdays and from 9am at the weekends.
Open till 11pm Thursday – Saturday and till 6pm every other day.
Cash only // Service not included