A few weeks ago an invite popped into my inbox inviting me to an event to showcase the new Nokia Lumia 920 Windows Phone and I couldn’t believe my luck. A group of bloggers were to meet at the Soho Hotel to collect a handset before being treated to a demonstration by award winning photographer, Laurie Fletcher. We would then be heading to Jason Atherton’s newest venture, Social Eating House, for dinner to test out the camera on the phone and to see how fantastic it performs in low lighting settings. 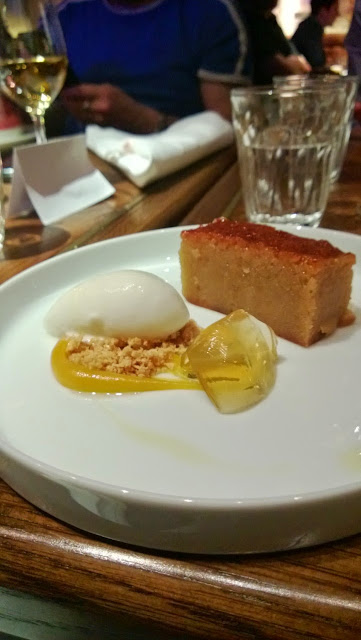 Anyone who knows me really well will know that I am a real technology geek at heart. I get WAY more excited about a new phone or gadget than a new pair of shoes or a handbag, so I was excited at the prospect of being able to play around with the new Nokia Windows Phone first hand. 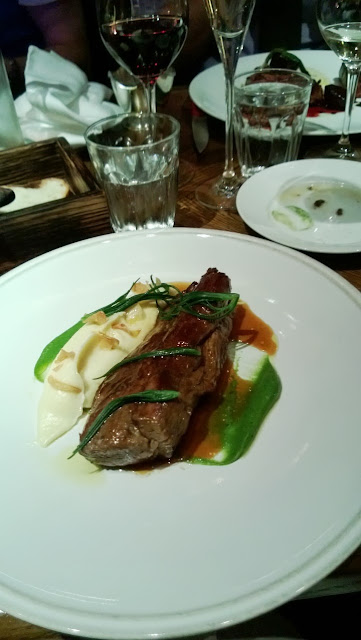 I had to admit to the PR that I took the plunge and swapped from the iphone to Samsung a year ago and have been very happy with the phone so far, but was willing to try out the Nokia and see if it could do the same thing for me. The purpose of inviting food bloggers to test the phone was because of the fact that the phone can take excellent images in low lighting. The camera takes in five times more light than competing smart phones without using flash, which makes it possible to capture dishes in low light conditions.

Laurie taught us a few tips and tricks before we headed to dine at Social Eating House. It was an added bonus to be able to eat at one of my favourite chefs new restaurants and the food didn’t disappoint. I enjoyed a range of dishes, including the well known octopus carpaccio, during the course of the evening. 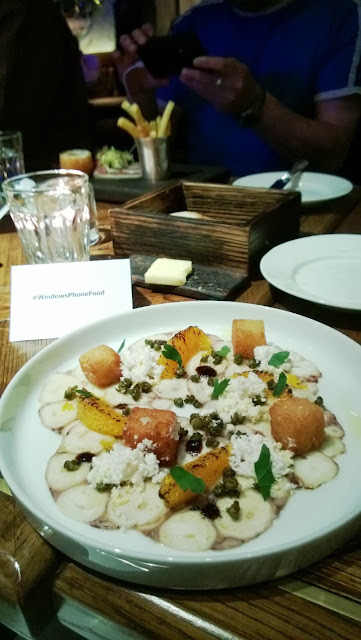 I have played around with the Nokia Lumia 920 since the event and there are loads of other amazing features that have made me fall in love with it. The only sticking point for me though is that it doesn’t have two of my favourite apps – Nike+ and Instagram. I am told that Instagram shouldn’t be far away but Nokia has just announced the arrival of Hipstamatic, which should tide me over in the mean time, especially because it allows you to share your images on Instagram.

My favourite features of the Nokia Lumia 920 Windows Phone are:

1) You can customise your phone to make it look and function how you want it to.
2) Microsoft Office comes as standard with the handset – perfect for those wanting to work on a Word or PowerPoint document on the go.
3) The hard exterior and scratch proof screen.
4) City Lens – a unique mapping technology that allow users to view location details according to the camera’s view. The feature uses the rear-camera unit and intelligently analyses location on sight with information such as name of the establishment, ratings, type, and distance based on your current position.
5) Navigation system. Going away on holiday and driving? Simply download the relevant country and off you go. And the best thing is, you won’t have to pay a single penny for data.
6) SkyDrive – 7 GB of free cloud storage for your files that’s accessible from anywhere with access to free Word, Excel, PowerPoint and OneNote in your browser.

The Independent hailed the Lumia 920 as ‘probably the most advanced smart phone on the market’ and I might have to agree with that. The other day I was thinking about the differences between my Samsung s3 and my Nokia Lumia 920 Windows Phone and I came up with the following – The Lumia is a phone for a professional who likes to have a good work/life balance and the Samsung s3 is a phone for complete social media addicts. The Nokia is sleeker, better designed and sturdier.

I think back to only a couple of months ago and I ridiculed my boyfriends Dad for using the older Nokia Lumia model. I have to say -I’m sorry Wayne, I eat my words, I’m completely converted.