Not a new tradition, I know, but strawberries and cream has to be the most famous tradition of Wimbledon. Every single person that I have asked over the last week or so has said that first, following with ‘I just love it’, of course.

You may know that I am currently on a gluten free diet. It has been four weeks since I gave it up but I have to say that my cake was too tempting on Sunday. It was looking at me, shouting ‘eat me Sarah, EAT MEEEE’. So I just had to. And I don’t have a single regret about it. This really is the perfect show stopping cake and I would recommend it for any party or gathering where you are in need of something British.

We served the cake along with a Lavazza Cappuccino that I made with my Limited Edition Wimbledon A Modo Mio machine, which served as the perfect accompaniment. I also made a few other treats – recipes will follow this week.

Don’t forget, you could be in with a chance of winning lots of Lavazza goodies, including 350 iTunes vouchers and tickets to Wimbledon (comp closes 19 June). Simply head to wimbledon.lavazza.com to take part in the ‘Enjoy Your New Tradition’ competition. 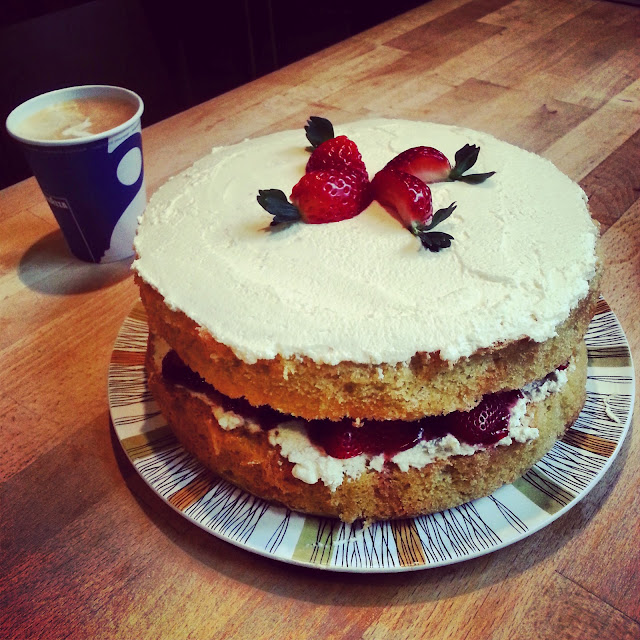 1. Sift the flour and baking powder into a large bowl.
2. Add the rest of the ingredients and whisk for about one minute until you have a smooth creamy mixture that drops off a spoon easily.
3. Spoon the mixture into two prepared tins, levelling it with the back of the spoon, and bake near the centre of the oven for 30-35 minutes or until the centre feels springy. Leave the cakes in the tins for 5 minutes before loosening the edge with a palette knife and turning out onto a cooling rack. Now peel off the liners, turn the cakes upright and let it cool.
4. Once the cakes have cooled, whisk the cream until stiff.
5. Place the cakes on a flat surface and smother cream on top of one of the cakes. Spread a thin layer of jam over the cream and place the halved strawberries nearly on top.
6. Place the other cake on top and smother with the rest of the whipped cream. Decorate how you like.