Tramezzino. It’s a great word isn’t it. But what does it mean? Well, the origin of Tramezzino can be traced back to the Caffè Mulassano di Piazza Castello in Turin where Italians decided that they wanted to have a go at their own version of British Afternoon Tea. But instead of opting for our (sometimes tasteless) cucumber sandwiches, they decided to use quality Italian ingredients. I made these for my Lavazza Afternoon Coffee Party because I’m half way through my Lavazza #NewTradition challenege and I wanted to mix it up a bit by making something authentic to Turin, the home of Lavazza and it’s family run roastery.
I have to say I had never heard of Tramezzino before this Lavazza NewTradition challenge but I’m so glad I found them!

The concept is the same – the crusts are removed but the bread is stuffed with Italian fillings. We used parma ham, parmesan, asparagus, egg and tuna, to name a few, but I imagine there are many more variations.

These sandwiches are perfect for picnics and parties and I can’t recommend them enough. They take a bit of time to assemble but oh it’s so worth it in the long run. I have been vague with quantities in the recipe below because you can really make them however you want to.

Don’t forget, you too could be in with a chance of winning LOADS of Lavazza goodies, including Limited Edition A Modo Mio machines, itunes vouchers and even tickets to Wimbledon. Simply head to wimbledon.lavazza.com. Good luck and let me know if you win! 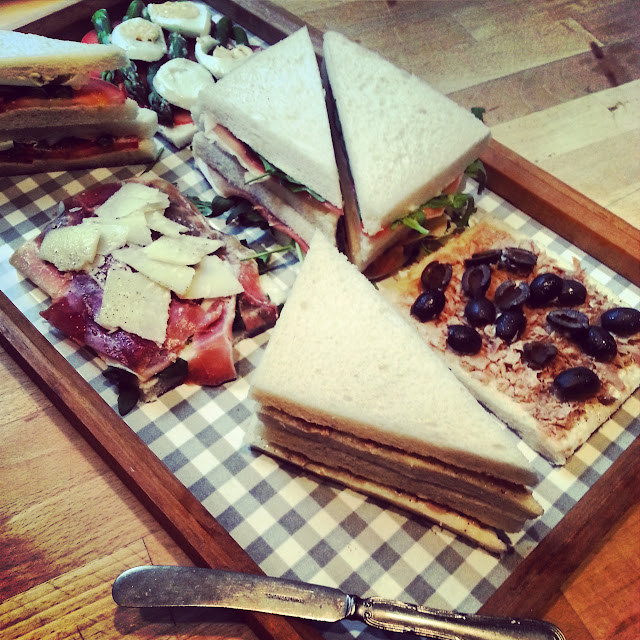 Method
1. Literally east as 1,2,3. Choose your fillings and assemble your sandwiches, cutting them into triangles to serve.