Last week on Tuesday night I left work and cycled down to the Chinese Cricket Club in the Crowne Plaza hotel where I met my dad. We were there to try the four course menu, which has been specially created to celebrate Chinese New Year.

The menu celebrates the Year of the Horse and consisted of Sichuan specialities. We were greeted with a Chinese Cricket Club fizz cocktail upon arrival, which piqued our interest as it was bright green and apple flavoured and  through the course of the evening tried a range of dim sum and traditional dishes. 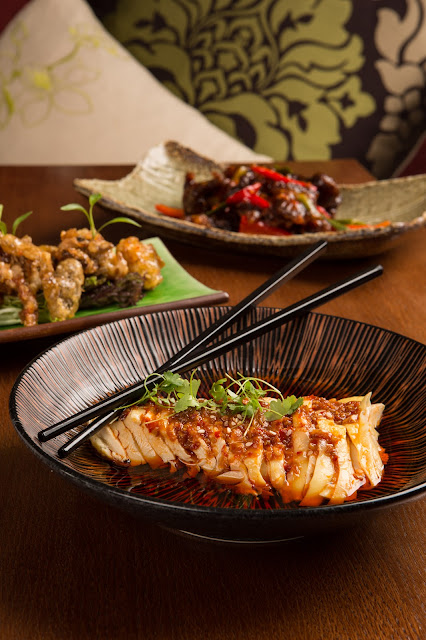 The four course menu consists of a range of dishes and we had Prawn Har Gao, a steamed Pork bun and vegetable spring rolls to start, which were your typical Chinese dishes. We enjoyed a quarter of crispy aromatic Duck with lettuce wrap and trimmings for the middle course, although some bits of meat were a bit dry – there also wasn’t quite enough sauce for the amount of meat and lettuce wraps we were provided.

It was the main dishes that really stood out for us. My dad was thrilled with the grilled jumbo Prawn hot pot, which he described as one of the best mains he has had at a Chinese restaurant in a long time. I would agree – it was full to the brim with juicy and tender king prawns and crunchy bamboo shoots, mange tout and peppers. The sea bass was also very well cooked, although the sauce was a bit too salty for my linking. I really enjoyed the sweet and sour pork and was interested to see that they had put melon, rather than the usual pineapple, in the dish.

The dessert was a bit of a surprise. The ‘lychee terrine’ description had us pondering over what form it would come in. We decided that it would take the form of jelly, but when it arrived, it was more like parfait with a thin layer of sponge and a dollop of lychee ice cream.

A couple of hours after we had arrived, we walked back out of the revolving doors onto London’s busy streets, feeling full, satisfied and looking forward to the rest of the Chinese New Year celebrations to come.