I really miss Soho, like, REALLY miss it. Since I started working and living in East London, I have noticed that I am turning into one of the people that used to irritate me. The kind that stays around their neighbourhood day and night and rarely ventures out of their little bubble.

Soho is an area that used to be my second home. I worked there, played there and was desperate to live there at one point. Now I probably only visit my old friend one a month, if I’m lucky. 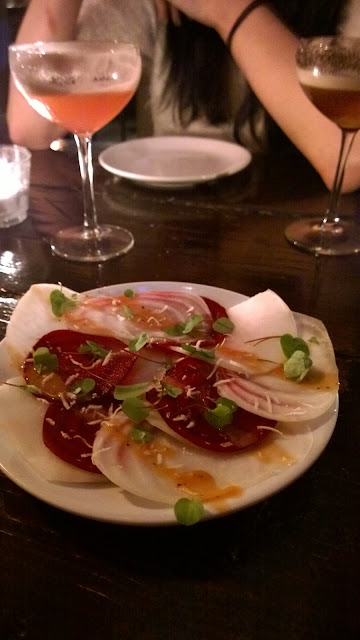 Since I ‘moved out’ a year ago, there have been a plethora of new openings, including a new basement bar/restaurant, Coal Vaults, which I headed down to check out last Thursday. Founded by young entrepreneur, Simo (Martyn Simpson) and Andy Kanter, Coal Vaults plays to the strengths of the exciting team behind it. Magnus Read (The Rooftop Café) has consulted on the menu, James KnoxBoothman heads up the kitchen and Jerome Slesinski works the bar.

The menu features a range of small plates and everything that can be is made in house – the bread, preserves and even the alcohol infusions. We chose four dishes to share between us and a few cocktails, but more on them later.

We plumped for the beetroot and bramley apple gratin with st tola and pickled pomegranate (a dish I would love to recreate at home); pig treacle and pickled fennel tops on chestnut toast; pulled rabbit with smoked black beans, sweetcorn and pineapple relish, avocado and sour cream flatbread and romeo and julieta smoked duck breast with sherry pickled rhubarb and walnut mash. We both agreed that the pulled rabbit was the favourite. The meat was so tender and the depth of flavour was immense. I’m dreaming of the meat and the spongy flatbread as I type. The pig treacle was smaller than I would have hoped, but maybe that’s just the glutton in me speaking. 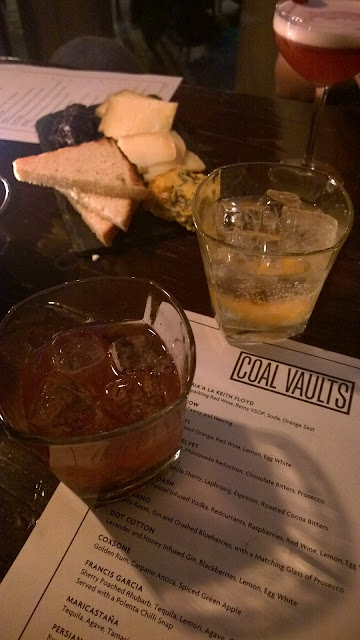 The cocktails were delish – we tried three each and made sure that we tried each others so we could taste a load of the menu! Lex’s Bolivia really impressed, which was vodka with manzanella sherry, home made roasted cacoa bitters and espresso. I also loved the Dot Cotton, a lavendar and honey infused gin cocktail with blackberries, lemon and egg white. But my favourite by far was the Marano – mirto rosso with kin and crushed blueberries, served with a matching glass of prosecco.

We couldn’t fit anything else sweet in our stomachs, so we ended with a massive and amazing Neal’s Yard cheese board.

Coal Vaults is a great addition to the thriving Soho drinking and dining scene. I’m already making plans to go back… to try the remainder of the cocktail menu, if nothing else.