I would say this as I am a Brit, but I truly believe that we have some of the most beautiful scenery in the world. One of the most stunningly beautiful places I have ever visited, Durdle Door and Lulworth Cove, is only a few hours away from London by car. The lush green grassy banks on the top of the cliff overlook a long thin stretch of white sandy beach, which is framed by the most incredible rocky terrain in the shape of a door (hence the name).

We are also lucky to have access to the Scottish Highlands, the Cotswolds and the Lake District. A few months ago a group of us decided that the mark the end of the summer it would be a lovely idea to bundle into two cars and drive up to the lakes for a weekend at the beginning of September. The aim of the trip was to do as many outdoor activities as possible. A climb up Helvellyn, the third highest point in England, was definitely on the cards and anything else was a bonus.

We decided that instead of staying at a camping site with others, we would pretty much rent a whole field to ourselves (which we shard with loads of sheep) through Private Camping, compelte with bell tent, large communal tent, power, a compostable toilet and shower tent equipped with small plastic pumping container that was to be our shower for the weekend. 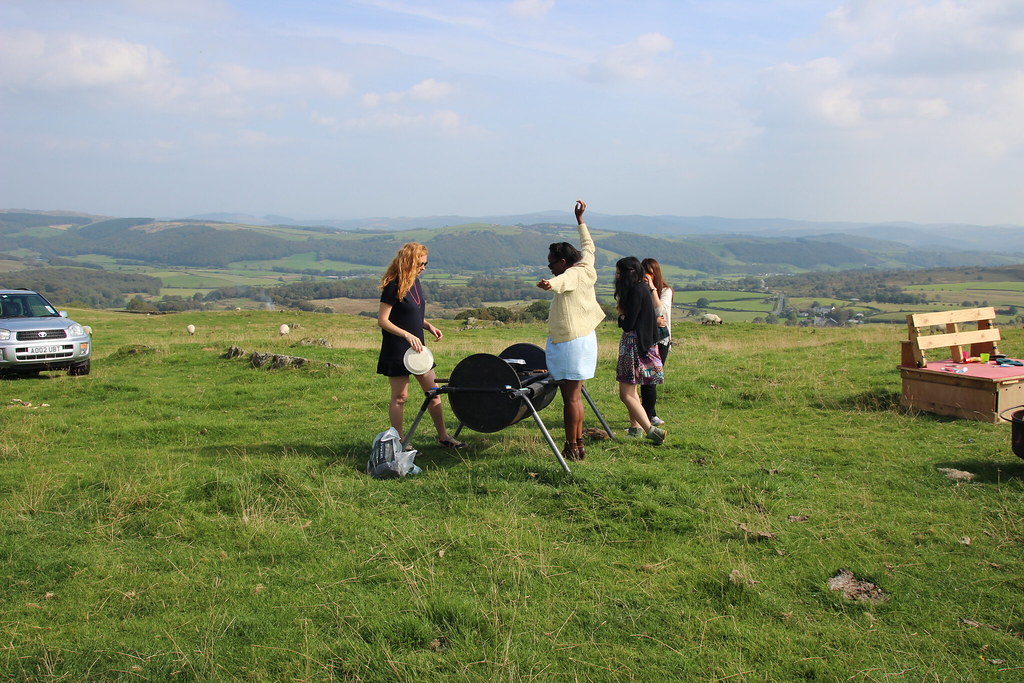 We arrived and met Toby at a local pub and he drove in front to lead the way to what was to be our home for the next three nights. It was a slight struggle for the car with no four wheel drive to make it up the hill, but after a couple of attempts, we were up. Toby showed us all of the ameinities and after a trip to the local supermarket, we were settled.

We awoke early on Friday morning to start our trip to Helvellyn, an hour drive from our campsite. When we arrived, we had a quick glance of the map and set off on our journey. Not all of us, in fact most of us, didn’t realise just how hard the climb would be and 30 minutes into the trek, I was praising myself for being sensible and not getting too carried away with partying in the empty field the night before. 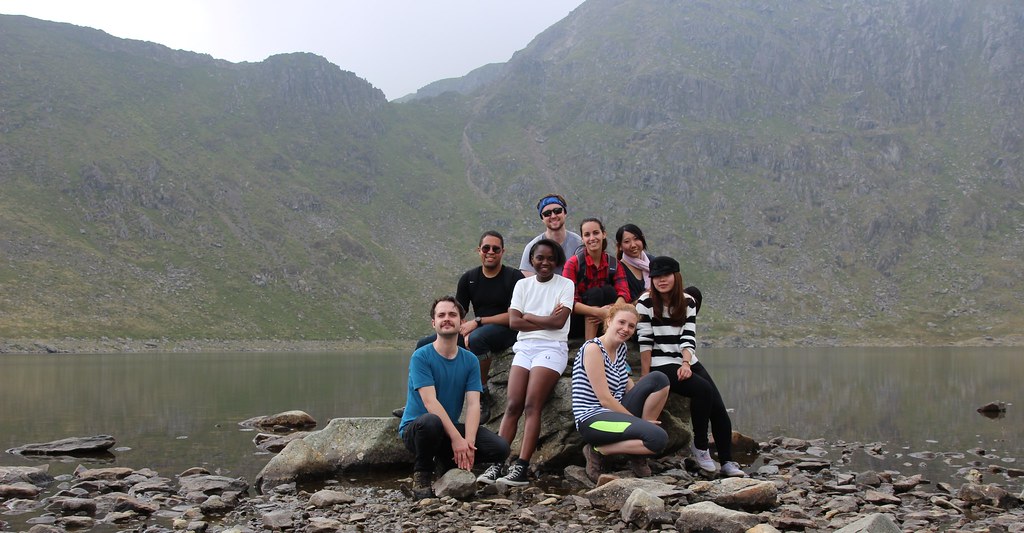 The first hour of the walk was mostly uphill and there were a few groans escaping the mouths of our group, but we didn’t let the sore legs and breathlessness dampen our spirits. After a quick 10 minute cereal bar break we carried on until we reached Red Tarn, a small lake high up on the eastern flank of Helvellyn, beneath Striding Edge and Catstye Cam. We posed for a quick group picture and as we left the lake, we were gobsmacked by what we saw. The hilly walk had turned into a proper climb and we were soon having to clamber over the volcanic rock, in order to reach the top of the mountain. 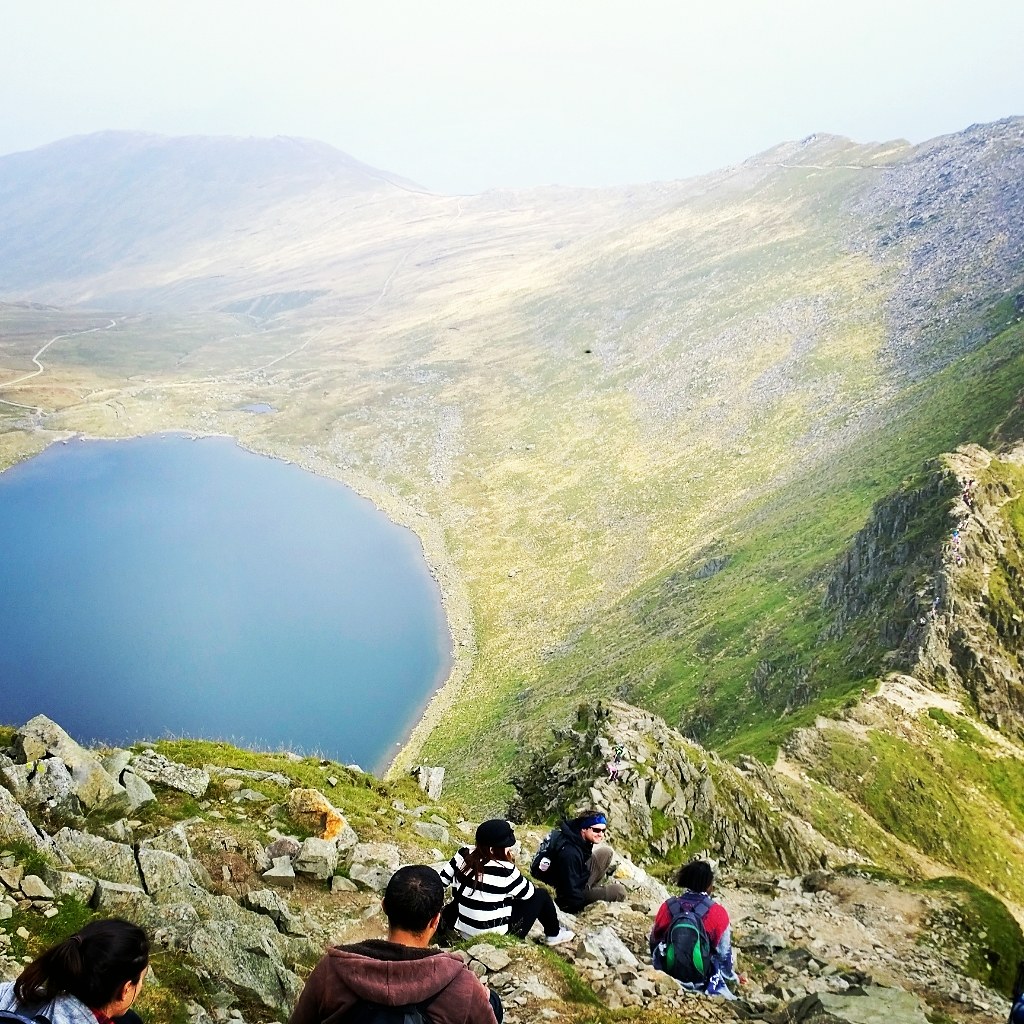 Not all in the group were comfortable with the climb, but we kept each other going by reassuring each other, showing each other our footing and giving tips on the best places to hold onto. There were a few Gladiator references banded about, which took our mind off the fact that if you looked downwards on either side there was a sheer drop, but after another 20 minutes or so we had made it to the top! Luckily the morning haze had burnt off so the view was picturesque, but we still weren’t able to see as much as you usually can on a clear day. The air at the top of the mountain reminded me of the thin and crisp air that I enjoy so much when I’m skiing and I tried to picture the how the views would be in the winter months. 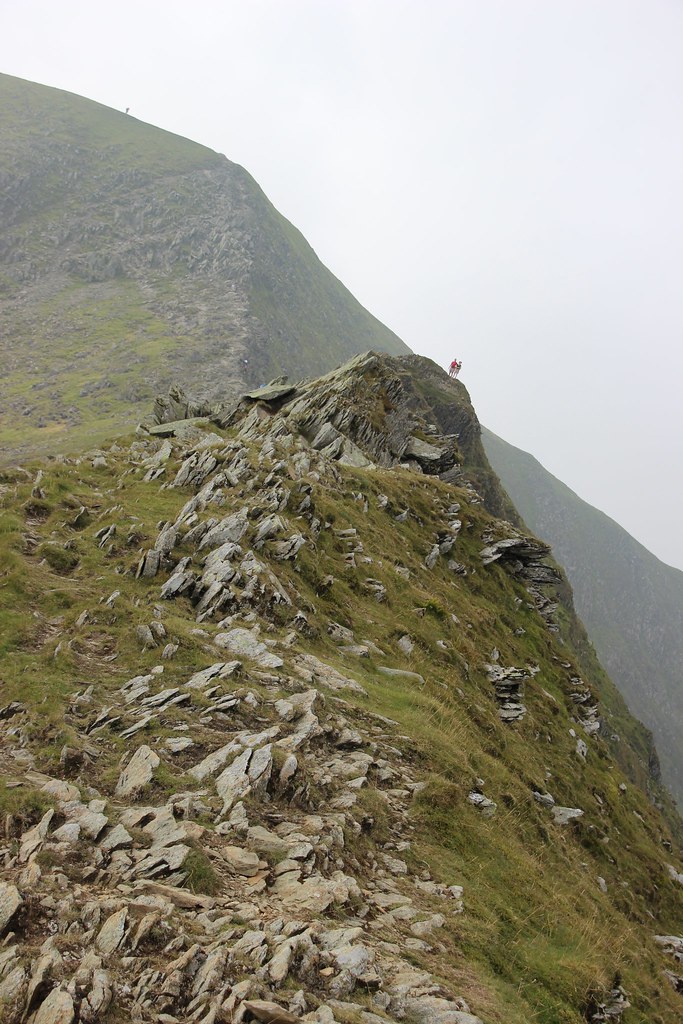 It took us 2 1/2 hours to get to the top and the descent another 2 1/2 hours. Climbing down was my least favourite bit as the loose rocks were slightly unnerving. As we approached the bottom of the mountin, on what seemed like a million rocky pavement slabs, I broke out into a run, legs shaking violently, heart racing, with a big smile on my face. As soon as our feet touched the flat gravel at the bottom, we jumped for joy and praised each other for making it. Climbing Helvellyn is definitely something I won’t be forgetting in a hurry and has left me asking what is next. My impending worldwide adventure is going to take me on some more interesting treks and climbs, I can tell you that for sure!