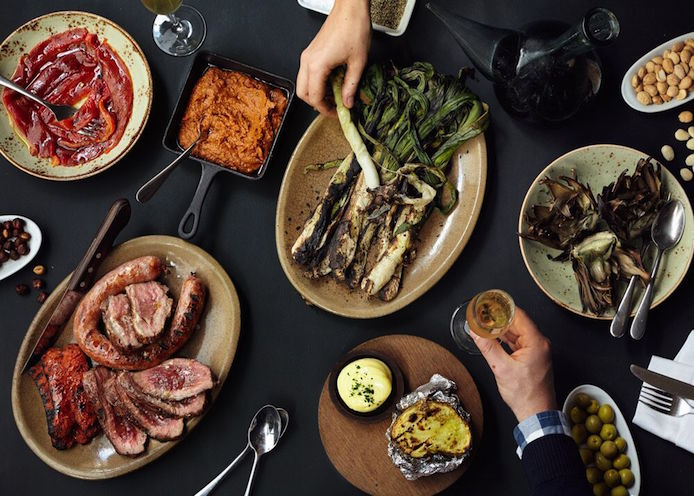 What
Tramontana Brindisa has added another feather to its cap of authentic, Spanish experiences; the Calçotada. Unknown to even many Spanish people, the Calçotada hails from the North-Eastern region of Catalonia, well-known for its gastronomy, tourism and football, and less well-known for its large, spring onion-esque vegetables. It is, essentially, a festival to celebrate the arrival of Spring, and indeed these fresh, quality ingredients, artfully prepared and delivered almost as entertainment, are quite something to celebrate.

Experience
Before arriving at Brindisa Tramontana on a cold, rainy Tuesday evening, I had little idea of what a Calçotada festival actually was. Intrigued, I waded my way towards the Shoreditch restaurant, struggling to imagine how a re-enactment of a Spanish Spring festival could possibly be achieved in weather such as this. And little did I know that the Calçotada was to be held outside.

I needn’t have worried; as I was shown out the back doors to the beautifully adorned tables, I was greeted by a wave of heat from the outdoor heaters and handed a cold glass of cava. So far, so good – in my experience, even in Spain a barbeque wouldn’t be quite this comfortable in January.

Accompanying the cava, we received three canapés: enormous, succulent green olives stuffed with orange; calçots in crispy, light tempura and calçot croquettes. At first sight, I could have believed the olives were small apples, and at this stage, if I’m honest, I still had no idea what a calçot actually was. In short, I was fairly unsure of what I was eating, but whatever it all was, it was delicious.

The next thing to arrive at the table was a bundle of whole, barbequed calçots each, wrapped in newspaper. At last, we were to be introduced to the mystery vegetable. Upon unwrapping my portion, I was confronted by a mound of what looked like Spring onions. The technique for getting the best part of the onion was shown to us by a waiter, and although I was never quite able to shake the absurdity of making my way through nine or ten whole onions, I was quite entertained by the method of extracting the centre of the onion, slathering it in Romesco sauce, and dangling it into my open mouth from a considerable height. Luckily, the staff had anticipated the potential pitfalls of this, and provided bibs. Bibs!

Upon entering the restaurant some time earlier, I had noticed some curious-shaped bottles on each table, and now we were to learn the technique behind these. From these bottles (think Genie’s lamp) we were to drink red wine by aiming the bottle roughly at our mouths from some distance. As you can imagine, we all replicated this technique with varying degrees of success, and as such, it was a fairly messy (and highly entertaining) affair, and for the second time that night (or possibly the second time in the last thirty years) we were grateful to be wearing bibs.

We were all thoroughly in the festival spirit by the time the main course arrived: a gigantic plate of sizzling chorizo, fragrant butifarra, tender lamb chops and presa ibérica (Iberian pork shoulder). This part of the meal was truly a meat-lovers dream. And finally, we received our Crema Catalana. This is a Spanish adaptation of the French classic crème brulée, and a personal favourite of mine, and I was not disappointed.

I left the restaurant satisfied, entertained, a little tipsy and very well-educated on the traditions of the little-known northern Spanish calçot festival. This was a truly cultural, seasonal and culinary experience, and one that is not to be missed.