I’ve said it before and I’ll say it again, Soho is my favourite part of London for food. I still believe it to be the area that has the most interesting and innovative restaurants in London and almost always the area that most food trends in the capital originate.

Enter Bone Daddies, one of Soho’s newest and trendiest restaurants. Along with Tonkotsu, Bone Daddies serves very fine and authentic bowls of ramen. It was freezing in London a couple of weeks ago so I decided to hot foot it over one lunch time and finally see what all the fuss is about.

The décor I’m pretty sure doesn’t lend itself to a traditional ramen bar. I am not overly fond of high stools as I can never get totally comfortable. But then they probably don’t want you to get too comfortable so that they can give your seat to the next people in line. And believe me, there are people waiting in line.

We glanced at the menu and although the snacks sounded delicious, with the likes of salmon sashimi (with shiso and lime soy) and soft shell crab gracing the menu. But we were pushed for time so opted for a hearty bowl of ramen each instead. Unlike Tonkotsu a few streets away, Bone Daddies has quite a large range with eight different bowls to choose from. I chose the Tonkotsu Ramen with spring onion, chashu pork and a 20 hour pork bone broth, while my friend had the Dipping Ramen with spring onion, kizami nori, chashu pork and a chicken broth. 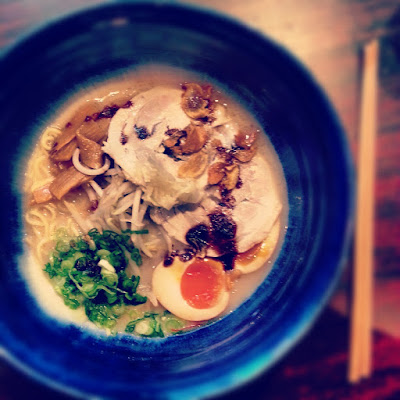 Our bowls arrived and my broth was almost white, owing to the 20 hour pork bone cooking process. My eyes were immediately drawn to the egg yolk so bright that I almost needed sunglasses to look at it. The egg is probably my favourite part of a bowl of ramen – soft boiled and then pickled. My second favourite part of a ramen bowl is the simmered bamboo shoots, which add such a delicious texture to the dish. At Bone Daddies, one of my least favourite parts of the dish was the pork itself – slightly too thin and not overly flavoursome but the broth lived up to its appearance – it was rich and utterly creamy.

I looked over at my friends dish and couldn’t help but feel slightly envious – only because her broth looked a little more flavoursome than mine and had the added chilli kick that I was really in the mood for.

Having both warmed ourselves up with the ramen, we were back out into the cold, looking forward to doing it all over again.