Oh. Just as I thought I had found the best location for a Sunday Roast in London, all goes to pot. News broke a few days ago that Ben Spalding, Head Chef at John Salt, had departed from the restaurant. I visited a few weeks ago with friends and we all declared it the best roast we had ever had. I am sad as I was planning on going back in a few weeks but having read the reports, I can understand why Spalding departed. The group that runs John Salt wanted to take the menu in a direction that Spalding simply didn’t, prompting his departure. But it’s not all bad news as he is currently looking at other sites in London to open his first restaurant that will be owned and run by himself.

I think it might be a little late to tell you about the roast that we ate that day. But you never know, he may well do something similar at his own restaurant when it opens so I’ll tell you anyway. 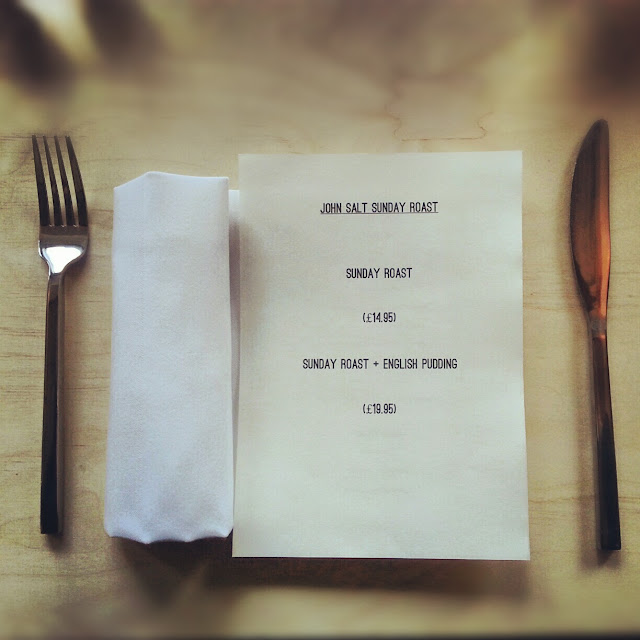 Aside from the food offering, John Salt lends itself perfectly to a calming and lazy Sunday roast. Reclaimed furniture and bright and airy interiors provide a good setting for a relaxing afternoon with friends. The menu gave you the choice of one roast and one English pudding (£14.95 for a roast and £19.95 for a roast with an English pudding to finish.) The day that we visited, the roast came with beef and a load of special trimmings – bbq’d parsnips with herbs, roasted yukon golds in chicken fat, crushed peas with orange & cream cheese, maple glazed carrots, buttered curly kale and ciabatta bread sauce. Not to mention the lashings of gravy and extra jug that arrived at the table with the food. 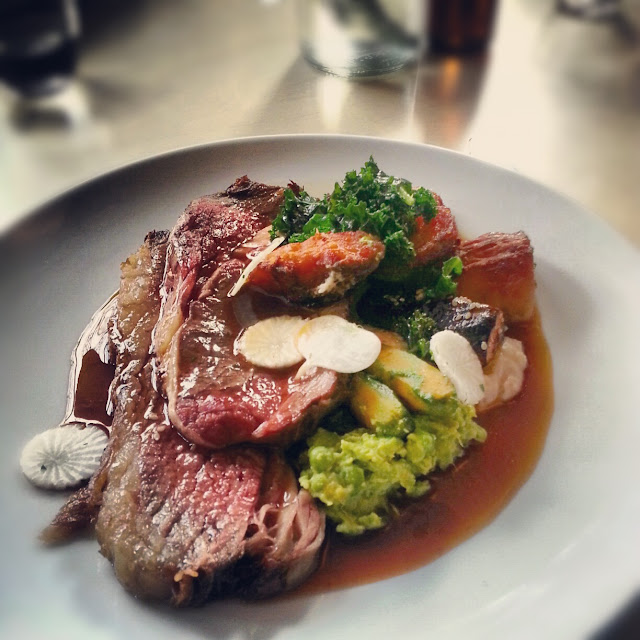 Now this wasn’t your average Sunday roast with roasties, Yorkshire pudding, a slab of meat and some soggy veggies, this was serious. For starters, the thick slices of beef had a beautiful deep pink colour, which when you placed in your mouth almost melted on the tongue. The vegetables weren’t your run of the mill – yes we had maple glazed carrots but we also enjoyed tender and rich yukon golds and peas with orange & cream cheese. On paper the peas don’t sound very nice, to me anyway. But on fork and in my mouth it was a different story.

One of the best things about that meal was the fact that the waitress provided us with a big jug of extra gravy for the table, as if preempting the question that would no doubt be asked half way through our meal if she didn’t. A week after we had eaten at John Salt, we had another roast at The White Bear in Hampstead and we were appalled when we were charged £1.50 for the equivalent of 3 tablespoons of extra gravy. We declined to pay when the bill came out of principal. If you are not provided with enough gravy from the outset, you shouldn’t have to pay for more. At John Salt we were given enough for our roast to have a bath and Jack loved it so much that he poured small amounts into his glass as he finished his dinner and drank it!

Our Sunday roast that day will live in our memories for a while. And while we’re sad that we may never get to try the chicken on a brick, we’ll await the opening of Ben’s first solo venture with baited breath.