Maybe it was because I didn’t have any weighing scales, or maybe it was because I couldn’t tell what temperature the oven was at, or perhaps it was because I was using a combi oven. Whatever it was, the chocolate chip cookies that I baked in the skiing chalet in Sweden went SO wrong. Slightly embarrassed, I took the bubbling mess out of the oven and tried to redeem them by placing outside in the freezing cold to firm them up. To my surprise they tasted OK and were demolished. But I wasn’t satisfied and was adamant that I would redeem myself with a fresh batch when I returned home.

We arrived back from holiday last week and I decided to put a new cookbook to use over the weekend. The first recipe on the list was homemade granola. I have made a few granola recipes in the past but I think this one may just top the list. I used half for a granola cookie recipe (posting soon) and I have used the other half for delicious weekday breakfasts with yoghurt and fresh berries. 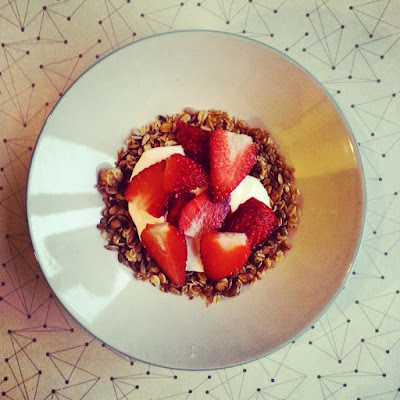 3. In a heatproof bowl or glass measuring jug, microwave honey, oil, and vanilla extract on high power until mixture is hot and bubbling, about 45 seconds. Pour over dry ingredients and toss to coat.

4. Spread granola onto prepared baking sheet in an even layer. Bake, stirring every fifteen minutes, until granola is golden brown and fragrant, 30 to 45 minutes. Let cool, stirring occasionally to break up the large pieces. Stored in an air-tight container, granola will keep for up to 4 weeks.

Breakfast for Dinner by Lindsay Landis & Taylor Hackbarth will be released by Quirk Books on 19th March, priced at £12.99.