2012 was the year of meat. It rode into London in all its glory and captured the hearts of, well, most of the capital. Leading the way were MeatLiquor, Pitt Cue Co and Pizza East owned Chicken Shop. Us carnivorous Londoners were so caught up in the meaty movement and it was inevitable that others would follow. Independent burger and chicken restaurants popped up all over and captured the imagination of home cooks, supper club owners and restaurant dreamers.

One of the newest meaty restaurants to take the up and coming foodie area of Farringdon is Lazybones. Situated just off Cowcross Street, Lazybones is a restaurant / bar, or should I say bar / restaurant? After visiting last week I’m not sure which I would put first. But I liked that about it. We grabbed a table in the middle of the room and perused the menus before ordering at the bar. We were provided with paper cups and straws, which we were told we could fill as many times as we wanted from the soda machine behind us and were given a small bag of freshly popped corn and told to add our own toppings, which were also situated behind us. 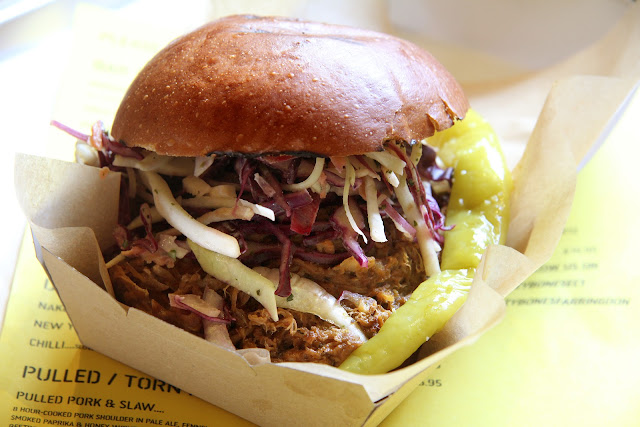 We ordered pulled pork with slaw – eight hour-cooked pork shoulder in pale ale, fennel, honey, smoked paprika & honey with a homemade cabbage, carrot, fennel, beetroot, celeriac, radish and yoghurt slaw, which arrived in a toasted brioche (of course) burger bun. The pork melted away in the mouth and the slaw was fresh and crunchy but there was a slight issue with the bun, which had a very soggy bottom.

To go alongside the burger we ordered a large portion of chips topped with monterey jack cheese to share and a couple of each of the chicken wings – sweet & spicy, BBQ and HOT! We were warned that the spicy ones would ‘blow our heads off’ so, curious, I tucked into that one first. It didn’t blow my head off but it did taste delicious. All wings at Lazybones are marinated and cooked twice for maximum flavour and you can certainly tell. My favourite wing was not the super spicy HOT! wing but the sweet and spicy, which are marinated in ginger, honey, coriander, hot sauce & lime.

No meal is complete without a little something sweet but feeling like we had just entered a meat induced coma we opted to share an American brownie with caramel ice cream. The energetic waiter bounced across the room with our dessert and told us that the ice cream came from his dads farm in Cornwall (I found out shorlty after posting this review that he was telling a little fib.) The name rang a bell but I’m not sure I had ever had the pleasure of tasting it before. Remember this name – Roskillys – the creamiest, most delicious caramel ice cream I had ever tasted.

I really liked Lazybones. It’s the perfect venue for a post work pit stop or a fun meal out with friends. Just save room for dessert.