I was about to embark on a trip to Melbourne when I got the memo that I was invited to join the Microsoft Loop membership program. As a bit of a tech lover (and, let’s face it, geek), I couldn’t take my mind off it all holiday. When I got to Melbourne, I saw my brother had the Surface 1 and asked him how he was getting on with it. He said he hated it. Not a good start. I had a little play and I couldn’t really see why. My brother (no offense, Matty boy) isn’t really the most tech savvy human being, though. He was, and still is, more into cars than the latest gadget. I, however, was in awe of technology from a young age. I blame my dad and his exciting stories. I’ll never forget being on a family holiday as a child and my dad predicting that one day I would be able to have a video call with my best friend. I was fascinated.

Fast forward a good few years and times have well and truly changed. Not only can I have a video call with my friend, I can speak to anyone I like virtually anywhere in the world. Technology has well and truly revolutionised the way we live. And I love it. I arrived back from Australia in November and attended the #MSLoop event at the Microsoft Xbox house in Mayfair. I was there with a group of bloggers to pick up my Surface 2 and my Nokia Lumia 1020 (but more on the phone in a later post). We were given a demonstration, set up with our gadgets and then left to our own devices (sorry for the pun) to use them in any which way we wanted. I was extremely excited about the tablet in particular – my new toy.

What first struck me about the Surface 2 is that it is a good looking device. The screen is longer and thinner than the ipad I have been used to. It is also very sleek and looks beautiful with the purple cover that doubles up as a keyboard. This is one of my favourite things about the Surface. I am fully aware that other tablets also have attachable covers, but I haven’t come across any that are as beautiful or functional as this one. As I sit here now, I am typing just as fast, if not faster, than the keyboard I use every day at work. 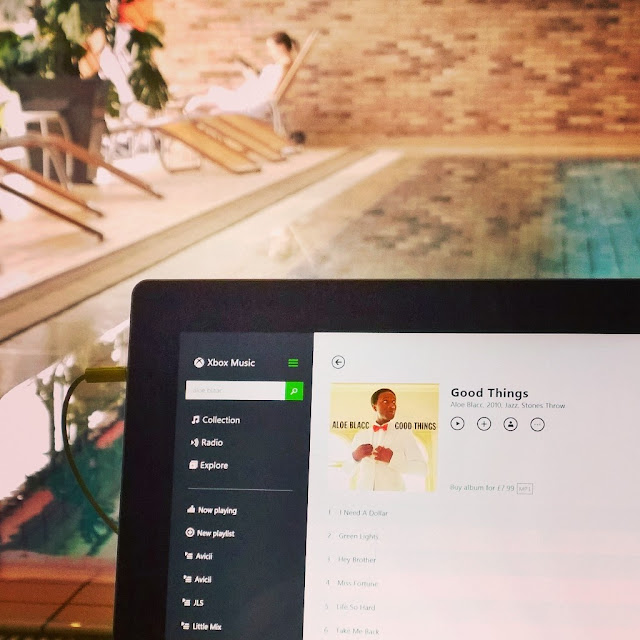 I am not going to lie, it took me a while to figure this device out. I read a lot of angry reviews about the new Windows 8 operating system last year and I have come to realise why. It’s different. And people don’t like change. It takes a while to get used to anything new, me included, but once you do, it’s bliss. I have listed a few of the features that I love below:

* Switching between apps and dual windows. I can have two windows open next to each other side by side.

* Being able to touch the screen instead of using a mouse (although the cover does have a fully functioning touchpad mouse).

* The interface. The tiles update automatically and you can customise it however you like.

* The stand. There are two settings and it’s really easy to stand up anywhere.

* Microsoft Office. Just as you know it on a desktop computer. Amazing.

I’m sure there are lots of features that I haven’t uncovered yet. Truth be told, I have mostly used this little baby for typing and blogging. I have hardly used the camera or downloaded many apps, although I have noticed that the range isn’t as broad as Android or Apple. I have loved using my Surface 2 as a tablet (reading and purchasing books from the Kindle app) and as a laptop, creating Powerpoint and Word documents and saving them to Microsoft’s cloud service, Skydrive, so I can access them from anywhere.