Us Brits love a queue. It’s just as well, as every good no bookings cheap eat restaurant seems to have one.

I am not a massive fan, though. I would rather not spend an hour of my life salivating and unable to concentrate on anything else other than getting inside and sliding my order in quick, sharp. Whenever I see a queue, I’ll recoil and either visit another day, or go back outside of peak hours.

I visited Five Guys a couple of weeks ago. I had seen the queue many times as I walked past but never plucked up the courage to join it. But I did and was prepared to let misery take control. I was pleasantly surprised, however, when after just five minutes, we were in. What I didn’t realise was there there is a huge seating area downstairs and it’s not exactly the kind of place you will sit and lounge around for hours, so I imagine the turnover is quite high. 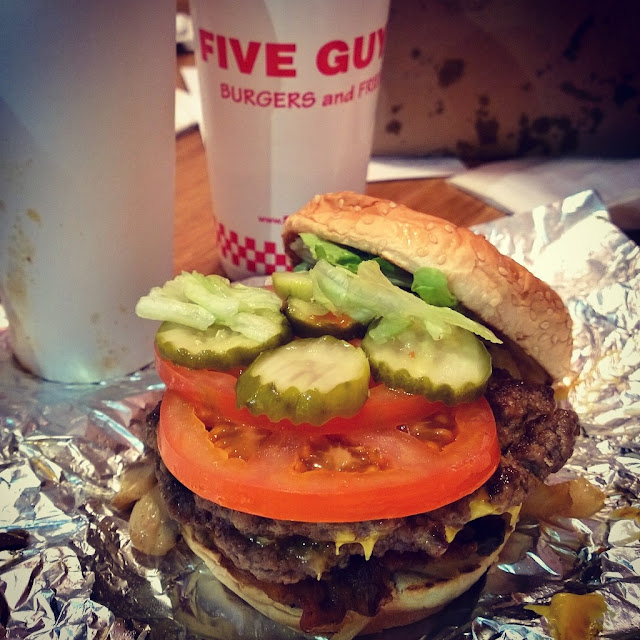 The concept is simple – choose your burger (hamburger, cheese burger, bacon burger or bacon cheese burger) and choose as many toppings as you like. If you want all of them, your burger would be stacked HIGH. There are also hot dogs and sandwiches available, but most people around us seemed to be munching on burgers. There are two types of fries – cajun and Five Guys special fries, which are cooked in no cholesterol peanut oil, making them healthier than your regular fries. There are also 100 drinks flavours on offer from a self service machine and free refills. Bonus.

Our burgers arrived and they were massive. The large fries were served in a large drinks cup and overflowed into the brown paper bags that they were served in. Definitely American sized portions!

As well as thoroughly enjoying the burger and fries, I was particularly interested in the drinks machine. I tried a few flavours of coca cola and lemonade, which was a novelty and I felt like a child getting all excited about the huge variety of sugary drinks available.

I enjoyed Five Guys and liked to hear about the quality of the food and the fact that there are no freezers, so you know that you’re not eating anything that has been frozen.

Five Guys does what it says on the tin and I’d definitely return to get my burger fix.