When I first moved to London nearly 9 years ago, the only reason I would go to King’s Cross was to catch the train home. It wasn’t exactly a desirable area, but in the last few years the area has undergone a serious transformation and has become a destination, particularly for food. Caravan and Grain Store sit next to the canal in the beautiful new Central St Martin’s campus and the likes of Honest Burgers has opened just around the corner.

Another new addition to the area is Karpo, an independent, modern neighbourhood brassiere, which is part of the 4* Hotel Megaro situated right opposite King’s Cross station. I had heard about Karpo, mainly because of the bright mural on the wall of the hotel and I remembered a range of pictures of the interior that really caught my eye.

I am always wary of restaurants that have the brasserie label as I have sampled some truly terrible food at ‘brasseries’, but what I have found over the last few years is that it’s always better to visit somewhere with low expectations because it makes it even sweeter when they blow your socks off. Enter Karpo. 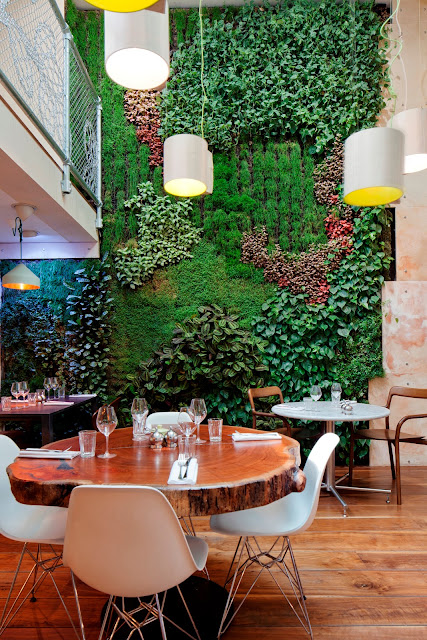 We arrived at 7.30pm on a Saturday evening and were surprised to find that the restaurant wasn’t busy at all. We were only the second couple to take our seats but it soon changed and not long after we were seated, a few large groups arrived and provided much needed atmosphere.

The menu is intriguing and includes dishes such as baked beetroot with goats curd, blood orange and candied walnuts and yellow leg chanterelles with parmesan, wet polenta and ricotta; but it was the hand dived scallop ceviche with Jasmine tea, white soy and black radish that caught my eye for start and the pork belly for main. The portions at Karpo are well judged. A nubbin of bread and the most divine salted butter arrived at the table before the starters – just enough to keep us going. The scallop dish was delicate and well balanced but it was the pork belly that stole the show – two neat squares of pork sat on Jerusalem artichokes, spring onions and crunchy hazelnuts. I have ordered pork belly many times but never had it served with such an interesting combination of flavours and textures.

We skipped dessert, which at the time seemed like a good idea but I am regretting it now, particularly the hot chocolate pot with vanilla ice cream and the Vacherin cheesecake with quince and walnuts. It’s no biggie, though, as I’m sure I’ll be back soon enough.

One of the best things about Karpo is the fact that I know I have found a little gem in London and one that I imagine I’ll be going back to again and again.