I get excited about food. But it’s only every so often that I get REALLY excited by a dish. A couple of weeks ago I was invited to try the new dishes at Gilgamesh, including a dish that really intrigued me, sashimi pizza. So me and Gabriela made our way to Camden on a hot September evening to try the dishes and for the first time in 8 years in London I walked up the inconspicuous escalator instead of past it for once.

Pizza is my favourite food (I’m not ashamed to admit it) and sashimi is also right up there. I’ve had moments where I have been completely addicted to sashimi and I’ll go to great lengths to get hold of it. But I had never heard of sticking the two together before and I wasn’t totally sure whether it would actually work. 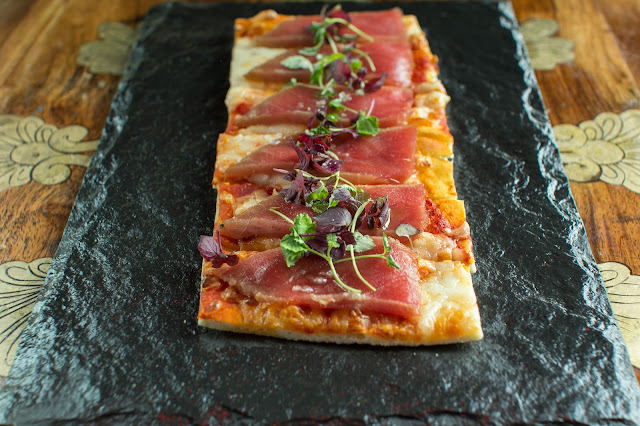 Gilgamesh is a restaurant renowned for the amazing Pan-Asian cuisine and Executive Chef Ian Pengelley wanted to take it to the next level by combining flavours of the East with a popular Western food concept. And the sashimi pizza was born. The Tuna and Truffle Pizza, also known as T’N’T Pizza, uses a traditional dough base, which is rolled into a thin rectangular flat bread. It is then topped with a tomato sauce, tuna sashimi, truffle sauce and shiso cress.

The pizza arrived and was cut into five slices. At first I couldn’t help but think £12 was expensive for such a small flatbread pizza but I quickly stopped that thought in its tracks when I thought about the ingredients involved. I quickly tucked into a slice and couldn’t believe what I was tasting. It wasn’t just about the taste of the pizza – it was the textures as well. The crispy base and smooth fleshy tuna perfectly accompanied each other. There was a big truffle kick and a rich tang from the tomato sauce. I wanted to eat the whole pizza but unfortunately I had to share it. I seriously considered ordering another one but thought that was too greedy.

I would go back to Gilgamesh, time and time again, just to taste that pizza again. I’ve found a new hero dish – and I’m not letting it out of my sight.